Loarnab was a hydra god of limited intellect, but tremendous might that occupied and ruled over the land that would become Senntisten very early on in the Second Age. It was killed by Zaros soon after his arrival to Gielinor, and turned into a power source to allow thousands of demons to travel from Infernus to Gielinor.

Being a hydra prior to its ascension, Loarnab was supposedly one of the colossi, Gielinorian creatures from before the First Age who somehow 'ascended' to something akin to godhood through a surplus of Anima.[1] At some point during the Second Age, it started terrorising the area that would later become Senntisten, forcing the locals to pay tribute to it in the form of human sacrifices or risk being devoured. These locals also provided Loarnab with its name.[2]

Eventually Zaros arrived on Gielinor with 100 avernic demons led by Duke Nemesis, and seeking to claim the area where Loarnab resided, they lured it out by providing sacrifices they had captured from nearby villages. After it emerged, the legion of demons attacked Loarnab and cut off its two heads, only for four more to emerge in their place. The battle between the two forces continued, with Loarnab decimating the demonic forces and regrowing two heads for every one it lost, until an hour later the majority of the demons were dead and the god possessed twelve heads. Now considerably weakened, Zaros ordered the demons to retreat and then caught Loarnab's attention, causing it to charge at him. Zaros stepped out of its way at the last second, and tentacles emerged from where he had stood, which proceeded to entrap Loarnab and injure it immensely, causing each of its heads to scream in agony.

After Loarnab was completely entrapped, Zaros proceeded to use his magic to turn it into a living power source, entwining its heads together and surrounding it with ice-covered crystals, which sedated it, although it remained tormented. Loarnab was taken to the Infernal Source, where Zaros converted Loarnab's divine energy to create a portal to allow for the remaining demonic legions to arrive on Gielinor. [3] Each of Loarnab's heads slowly turned to stone, while Loarnab struggled to stay alive. After the twelfth Demonic Legion had arrived from Infernus, Loarnab finally died, with its final head turning to stone and the rest of its body soon following.

The tentacles and crystal then dissipated from Loarnab's body, leaving its corpse behind as a "twisted monument a sign to any who would oppose Lord Zaros."[4]

Despite Loarnab's death, there remained infestations of hydra throughout the Zarosian Empire, which became known as the "Spawn of Loarnab." They were considered vermin and tended to hide in sewers. After Zaros's defeat, the Spawn of Loarnab grew larger and more aggressive. Their largest member was slain by Hebe and Anax, her lion companion. Afterwards, the remaining hydra fled.[5]

During the God Wars, Loarnab's heads would be relocated to the bottom of the Infernal Source beneath Forinthry by the Order of Dis. Once there, their residual energy was once again used to create a portal to Infernus, and the Infernal demon Dagon was bound to them in order to serve as its guardian.

During the year 143 or 144 of the Fifth Age, Tolna, who was looking for an ancient civilization, was swallowed by a sinkhole. His body and mind was terribly warped, which he expressed in four ways; anger, fear, confusion and hopelessness. Considering these were the emotions Loarnab felt while being held captive, it is likely remnants of Loarnab's energies still influence the underground area. in 169, 25 years after Tolna's disappearance, he was rescued by an adventurer, who uncovered the rift and overcame the twisted manifestations of Tolna's emotions.

The World Guardian would later discover Dagon in his prison, surrounded by Loarnab's twelve heads, and release him from being trapped as keeper of the Hydra Gate. 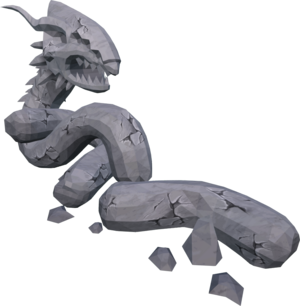 One of Loarnab's petrified heads in Varrock Museum.

Within the world visited during Dimension of Disaster, Loarnab became known as the Dark Imperator, and in some ways fulfilled the role that Zaros had in the main universe. Zaros never learned of or arrived to Gielinor, thus allowing Loarnab and his empire to reach far enough from Senntisten to subjugate even the territories of other gods. Loarnab's intelligence and power grew with his empire, and he continued to devour its citizens as he pleased, even gaining the ability to summon demons from Infernus.

Eventually, Loarnab's empire encroached on Menaphos, forcing Icthlarin to bring help in the form of the Mahjarrat. Instead, they defected to Loarnab upon witnessing his power. Although their lives were luxurious, some of the Mahjarrat became bored of their peaceful and easy lives in the empire. Zamorak soon led a rebellion and slew the Dark Imperator himself, ascending to godhood. Parts of Loarnab's petrified remains can be found in New Varrock's museum today.