From the RuneScape Wiki, the wiki for all things RuneScape
Jump to navigation Jump to search
For other uses, see Inquisitor (disambiguation). 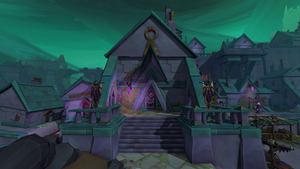 The headquarters of the Inquisition in Senntisten.

The Inquisition is the Zarosian Church's Secret Police[1][2], originally an off-shoot of the Praetorian Guard, which travelled the world confiscating powerful magical items and punishing those who decided to stand against them with their powerful weapons.[3] One object known to have been used by the Inquisitors is the Inquisitor staff, which, in part, is created from the Praetorian staff. The Inquisition worked alongside the Praetorians on the daily basis, although the latter's leader, Praefectus Praetorio Sliske, questioned the need for two sets of secret police.[4]

One of the Inquisitors, Emmerich occasionally visited the Kharid-et fort to deposit their valuable finds within the secure vaults beneath the fortress. The Heriditas Expedition, which was lead by Bilrach and Lucien, were known to have deposited at least one extremely powerful item within the vaults: The Heart of the Sun, otherwise known as the Kharid-ib or the Heart of Tumeken. It was deposited and secured into the Vaults of Heriditas, beneath Kharid-et, following the dangerous expedition which cost the party hundreds of human lives.[5]

Kharshai operated out of Senntisten and was responsible for investigating matters like secret plots and passing judgement to the accused of dissent. When Kharshai was summoned by Azzanadra to the Empty Throne Room to investigate the plot against Zaros, he questioned many high ranking individuals and served as a judge of the suspects right before Zamorak's betrayal.[6][7][8]

Following the fall of Zaros, Sliske, leader of the Praetorians, has dealt with Inquisition matters along Praetor Trindine, keeping an eye on a number of individuals that were of interest to Inquisition, either as potential agents, assets or dissidents. At some point the top four persons of interest were warrior Damis, priest Dagroda and a pair of twin demons, Castyx the Lascivious and Gready the Corpulent. Sliske used their names as a code to the file cabinet that protected the shadow ward within Inquisition's headquarters in Senntisten, located near a market to the north west of the Cathedral of Azzanadra. The headquarters were visited in the Sixth Age by the World Guardian, seeking the ward.[9] 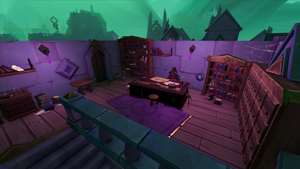 The office inside the Inquisition's headquarters in Senntisten.

The Writings on the Walls, found within the five dig sites that became of interest to the Archaeology Guild in the Sixth Age, refer to a mysterious group, describing them as having begun in Kharid-et as surviving remnants of the Inquisition[10], confiscators of power much like in the Inquisition[11], and, the power behind the throne[12]. Veilinius, a Chthonian demon who, along with the Order of the Temple of Zaros he commanded, inflitrated Saradomin's ranks for millennia, also described himself as the power behind the throne when confronted by Sir Owen Sonde[13]. The symbol seen in Writings on the Walls was also used as a tattoo by individuals such as Acting Guildmaster Reiniger, who was secretly a member of clandestine Zarosian organisation known as Silhouette, which infiltrated the Archaeology Guild and led to the disappearance of Guildmaster Tony.[14]