Senntisten Temple is a temple found under the Varrock Dig Site. The location becomes accessible after partial completion of The Dig Site quest, but players need to complete The Temple at Senntisten quest to fully utilise the temple. After completing the Temple at Senntisten, the area is enlarged and the Altar of Zaros is added. The Altar allows players to switch to the Ancient Curses, and boosts Prayer points by 15% above normal maximum.

The Temple was once part of Senntisten, the capital of the Zarosian Empire. After Zamorak banished Zaros, the Temple, along with rest of the capital, was overrun by Zamorak forces. The remains of the city were only recently uncovered.

During the Temple at Senntisten quest, an adventurer assisted Azzanadra in retrieving the Frostenhorn, Barrows icon, and the relic previously stolen from Entrana. With all the relics in place, the Temple is restored and Azzanadra can again communicate with Zaros. It seems that the portal links Zaros to Gielinor.

There are several Skeletons roaming the western chamber of the temple. Azzanadra states that Zarosians honour their most faithful by burying them near the temple. However, Zamorakian invaders desecrated the burial chamber, which naturally resulted in the undead appearing.

There are five ways of getting to the Temple:

The two parts of the dungeon are in different locations with respect to one another than you would expect from their surface entrances. The northeast winch leads to the chamber that is south-west of the west winch's entrance point. Use the winch at the western part of the Varrock Dig Site to enter the Temple.

The sacks in the north part of the chamber are the object of a Treasure Trails clue.

Upon entry, the player is in a small chamber with the rope to the surface and two arcenia root spawns. The chamber to the north-east has a barrel with nitroglycerine in it, a chest which contains ammonium nitrate and a spawn for the book on chemicals.

The southern end of the dungeon differs depending upon the player's quest progress. During The Dig Site quest, the large chamber to the south is blocked by bricks and piles of rocks. The player demolishes this barrier during the quest, using explosive chemicals the player makes. The south part of the dungeon has only a single chamber, which contains the stone tablet. It also contains level 22 skeletons, many bone spawns, and five silver rocks. After completing The Temple at Senntisten quest, the southern end of the dungeon has two chambers. The south chamber no longer has skeletons but, along with holding the Altar of Zaros, there are four tool tables containing bronze pickaxes, hammers, saws, and chisels, which the player may take. The chamber still contains many bones but only one silver rock. The south-west chamber contains level 22 skeletons. 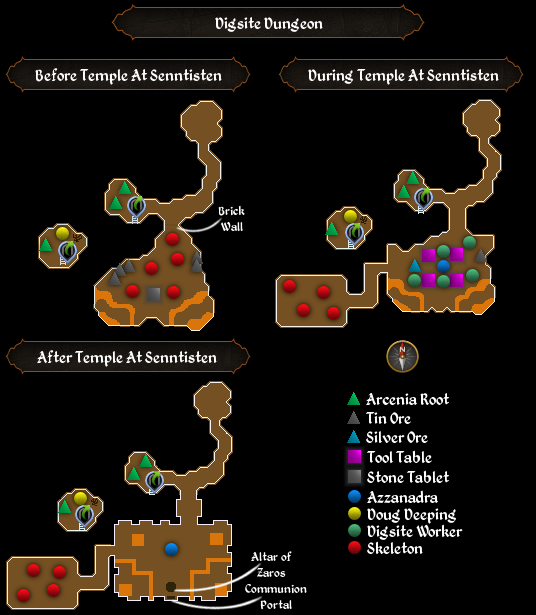