From the RuneScape Wiki, the wiki for all things RuneScape
Jump to navigation Jump to search
The Old School RuneScape Wiki also has an article on: osrsw:Paddewwa 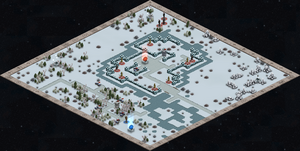 Paddewwa in Armies of Gielinor.

Paddewwa was a fortress in the massive domain of Zaros. Following Zaros's defeat, it was destroyed.

Little is known of Paddewwa. Geographically, it was in approximately the same area as modern-day Edgeville. During its existence, Paddewwa was a mighty military fortress, not far from the North-west edge of Senntisten (which was roughly in the area of Varrock) [citation needed]. Its exact purpose is something of a mystery, as Zaros held absolute power in nearly all of what is now Asgarnia, Misthalin, and the Wilderness. This puts Paddewwa near the centre of Zaros's main kingdom, meaning it was unlikely to see military conflict. Proposed reasons for its existence suggest that it was more of a symbolic settlement or that it also served as a residence for citizens: or that it was an early settlement in Zaros's kingdom.

Following the betrayal of Zaros at the hands of Zamorak, the God Wars began, and the kingdom of Zaros fell at the hands of many races and religious factions. Paddewwa was amongst the settlements destroyed by the forces of Saradomin during the God Wars as a part of the Zarosian Extermination, its original appearance can be seen in "Armies of Gielinor: Saradomin Strikes campaign" in the Paddewwa level where it is shown to be fortress heavenly guarded by Zarosian mages and rangers.

The approximate location of Paddewwa as it appears today, right in Edgeville

In the beginning of the Year 169 of the Fifth Age, King Roald of Varrock had the area incorporated as the town of Edgeville. For some time, ruins had stood at the location of Paddewwa, known to those of Misthalin as the "Ghost Town". Whether or not these were the ruins of Paddewwa is unknown, and it is possible they were the remains of a much later settlement. A small crypt can be found at the south of the town, which may be the only standing part of Paddewwa.

Those with the knowledge of Ancient Magicks can utilise a Zarosian spell, Paddewwa Teleport, that teleports the user to Edgeville Dungeon, where Paddewwa once stood, requiring 54 Magic, and using 2 law runes, 1 air rune and 1 fire rune.