From the RuneScape Wiki, the wiki for all things RuneScape
Jump to: navigation, search
The Old School RuneScape Wiki also has an article on: osrsw:Annakarl 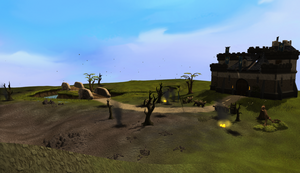 A view of Annakarl during the God Wars.

The ruins of Annakarl as they appear today.

Annakarl was one of Zaros' fortresses that was located in what is now the Wilderness. It was captured by the early Third Age and destroyed somewhere between the year 3100 and 4000 during the Third Age by followers of Zamorak and Saradomin. The Demonic Ruins in level 47 wilderness are all that remains of Annakarl today, and you can teleport there with the Annakarl Teleport spell.

Annakarl can be seen in its prime during a cutscene in the Ritual of the Mahjarrat Quest. During the God Wars it was under the control of Saradomin, but came under attack from Zamorakians as shown in the same cutscene.