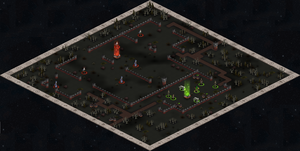 Dareeyak under Saradomin's control during the last period of the God Wars.

Dareeyak was one of Zaros's fortresses that resided in Forinthry, the area that is now known as the Wilderness. It was destroyed during the Third Age, an age also now known simply as the God Wars. The fortresses' demise came about when Zaros's loyal soldiers were destroyed by followers of Zamorak and Saradomin as part of the Zarosian Extermination. At the site where Dareeyak once stood, ruins can be found to the west of a bandit camp.

However, those ruins aren't Dareeyak, according to Summer Bonde, a girl that lived in a neighbouring farm during the early Fourth Age, the ruins are from a city she used to visit very often. As Summer Bonde lived in the early Fourth Age and Dareeyak was destroyed in the Third Age, it is more likely that the structures may have been re-used by later settlers, and the fortress itself is the bandit camp.

Those who possess the knowledge of Ancient Magicks can utilise a Zarosian spell to teleport there. The spell requires 78 Magic, the completion of the Desert Treasure quest, and consumes 2 air runes, 2 law runes and 3 fire runes.

At some point the fortress fell under Saradomin's control and was guarded heavily by an military order containing of rangers and mages. At the end of the God Wars, Guthixians, who sought to free the world from the destruction of the gods, managed to conquer to fortress.