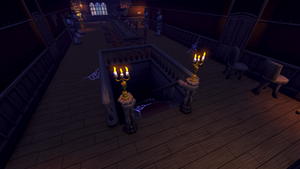 A typical room inside the mansion

Draynor Manor is a large haunted mansion north of Draynor Village. Its owner is Count Draynor Drakan. It consists of four levels and is central to three quests. It also holds the portal that grants access to the dimension where killerwatts reside. The manor is home to several different types of monsters and various oddities.

A committee called the Draynor Manor Restoration Fund is soon going to restore it into a community museum, according to Miss Schism. 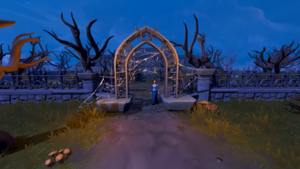 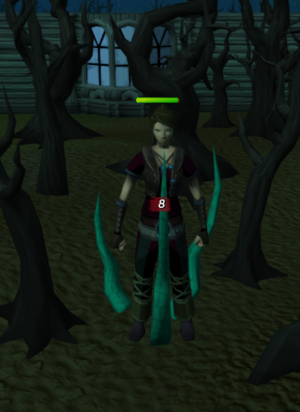 A vine attacks a player from the ground.

Guy's Ghost in the gallows

The property surrounding the manor itself is completely fenced in, except for the gate at the south. Veronica is hanging around here and will ask players to look for her fiancé. It is full of fungus and dead trees, and a few of these trees are undead trees (which are represented as a yellow dot on the map instead of blue) which will actually take a swipe at players and hit them for minor damage (maximum 33) if they pass too closely. These can be identified by their examine message, which reads as "Its bark is worse than its swipe". They are also identifiable by having character shadows on High detail, as opposed to scenery shadows for regular trees. The Protect from Melee prayer can reduce the damage the trees inflict. However, players cannot attack the trees themselves. The option for chopping down these specific trees also does not appear unless the player has started the Animal Magnetism quest.

Additionally, there are invisible vines which will attack the player from the ground, and always hit for 10 or 20 life points of damage.

In the south-west corner of the property is a fountain, which is a plot device in the Ernest the Chicken quest. Directly to the west of the manor is a special Farming patch for growing cave nightshade, and a compost heap (also a plot device involved in Ernest the Chicken), and a patch of special cabbages. These cabbages are unique in that they boost Defence 1 to 2 levels temporarily. During the course of the Black Knights' Fortress quest, these cabbages are referenced by the witch brewing the "doomsday potion" (incidentally, one cannot use a cabbage from here during the quest - the game will not let players actually ruin the quest). Right next to the cabbages is an evil turnip patch, where members can grow an evil turnip for Summoning.

North of the manor amid dead trees is a single gravestone, which if examined, reads "here lies Guy, he told a lie, so we swung him from the gallows high!", also from which a Draynor skull (used in A Fairy Tale Part 1) can be obtained if a player digs there with a spade. Until an update an unknown time ago, Free-to-Play characters could dig up the skull. This was useless, however, because the object was read as a member's object. Now it gives the notice that you have found a member's object, but it would be pointless to take so you leave it. To the north-east is a single gallows. If the player looks at the Gallows long enough, they may see a dead body hanging from the hangrope for a split second before disappearing. This is apparently "Guy".

The front door slams shut behind players when they walk in and cannot be opened from the inside. There is a staircase leading up immediately beyond the antechamber. Behind the staircase is a closet containing a level 22 skeleton and a rubber tube, which is an item required to complete the Ernest the Chicken quest. The door to the closet requires a key, which is buried in the compost heap outside. A spade is required to search the compost heap.

As players wander around the manor, they may find themselves being followed by wooden chairs. These chairs are harmless and the player can walk through them. There are also portraits that have eyes that move as you turn the screen. They cannot be examined.

Exploring the hallway through the door to the north takes players to the east and west areas of the manor's main floor. Opposite the door is a grandfather clock. The hallway is lined with spooky pictures, candelabras, suits of armour, and candles sconced on the wall, as well as a grand piano in one corner to the east. The eyes on the paintings will follow your camera angle around. The helmets of the suits of armour will glow red in their visors and will look toward you as you walk around the room. At the east end of the hallway is a staircase leading down, and a storage area containing a spade, shears, bucket, and a Bronze medium helm. The door to the north leads into the yard, allowing players to escape the manor.

The west half of the manor contains a kitchen with a Witch, complete with a range, wardrobe, magical symbols, and a table & chair set. A room to the south of the kitchen contains poison. Further to the south is a study. Searching the left Bookshelf against the west wall of the study reveals a "secret door" which takes the player into the bedroom and a ladder leading downwards. A switch on the wall opens the "secret door" allowing the player to exit the bedroom. Ava is found in the bedroom and is the start point for the Animal Magnetism quest. 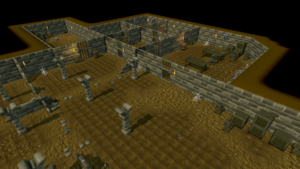 The maze in Draynor Manor's dungeon

The ladder in the bedroom leading down takes players into the manor's main dungeon. The dungeon is littered with barrels, crates, and small spiders. There are candles sconced on the walls.

There is a small maze of rooms here which have locked doors. These doors are operated by six levers on the walls - the correct sequence must be found in order to open the westernmost door to get the oil can in order to complete the Ernest the Chicken quest.

The staircase in front of the front doors leads up to the 1st floor[UK]2nd floor[US]. Another hallway runs east and west, with the ladder to the 2nd floor[UK]3rd floor[US] beside the stairs leading back down to the ground floor. This hallway is also littered with statues, candelabras, etc. The west area of this floor has a destroyed-looking room haunted by three level 25 ghosts.

In issue 30 of Postbag from the Hedge, Postie Pete revealed how the ghosts came to haunt the Manor.

The east area has two rooms; one contains fish food and the other is a bathroom, which is also haunted by a ghost. The chairs in the room may begin to follow the player around unless they turn around and look at it, in which case it stops moving until the player turns back around. 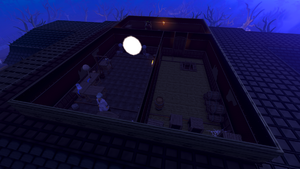 The 2nd floor[UK]3rd floor[US] of Draynor manor is home to Professor Oddenstein and his "strange machine". The Interdimensional rift is housed here; it allows members to enter the plane where Killerwatts can be found. Also any player doing the Holy Grail quest will discover the Magic Whistle in the most southerly room but only if they have the Holy table napkin. 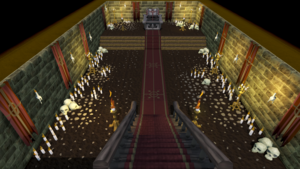 The staircase in the eastern section of the ground floor[UK]1st floor[US] leads to a small basement containing a coffin. There are tapestries adorning the walls and small candles on the floor. A bronze medium helmet used to respawn in this room.

It used to be possible to step on the candles on the floor here. Upon standing on them, characters would say things like "Gah!" and "Argh!", as the candles will burn their feet. The candles used to deal damage, no more than 2 (20) per hit. This was removed.

The coffin contains the undead remains of Count Draynor. Once the Count had been defeated, players could "search" the coffin to discover that it only contained a pillow; Examining the coffin would yield "looks comfortable." Following the 25/05/2011 graphical update to Draynor, the "search" option is no longer available after opening the coffin. Examining now yields "An open coffin."

After the update on 15 December, 2009, a jail cell was added in the south-eastern corner of the basement in which a inaccessible wall crack is located with the option to crawl through. Trying to open the cell door will yield the message: "Why would I want to lock myself in a cage?". It has been discovered that this jail cell is where Count Draynor places his victims if they have not started the quest yet to "save for later." This happens only the first time you are defeated, the second time you will go to your respawn point. However, players can crawl out through the crack to escape and appear outside the manor.