From the RuneScape Wiki, the wiki for all things RuneScape
Jump to: navigation, search
This article is about April Fools joke. For the achievement, see Wet and Wildy.

Wet 'n' Wildy is a fictitious RuneScape theme park that was created for the 2010 April Fools joke. On 1 April 2010, Jagex told the Runescape community that it was under construction near their UK office. Its plans were released to players in the RuneScape Theme Park – COMING SOON! update and a Developer Blog. 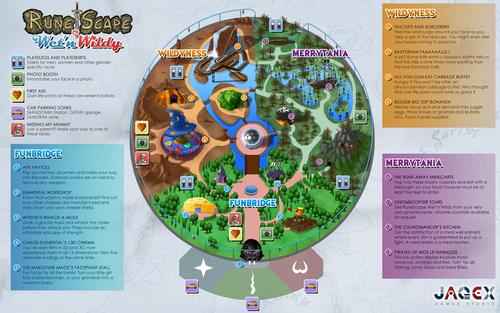 The map of Wet 'n' Wildy

Toilets for men, women and other gender-specific races

Immortalise your face in a photo

Lost a parent? Make your way to one of these kiosks

The park is divided into 3 main areas, which contain most of the rides and attractions.

Play on words of: Lumbridge

Play on words of: Wilderness

Play on words of: Morytania