From the RuneScape Wiki, the wiki for all things RuneScape
Jump to navigation Jump to search
For the music track, see Lexicus Runewright (music track).

Lexicus Runewright is the only known librarimancer in Gielinor and one of the bosses found in Daemonheim, requiring level 39 Dungeoneering to encounter. He can be encountered on floors 20 to 29 of Daemonheim.

According to his journal, he and Astea Frostweb served as guardians after they launched a failed assault on Bilrach. Lexicus seems be in a relationship with Astea, as he refers to her as "my beloved Astea". Astea's own journal indicates that she and Lexicus are lovers.

Lexicus was the one who concluded that binding runes to a Behemoth would result in better taming of the creatures. Thus, he is the creator of the Runebound behemoth.

Lexicus uses all styles of attack, as do his summoned books. His magic attack consists of him opening his book and firing glowing words at the player. The ranged attack has the same animation, except he fires pages from his book. He hits the player with his book when he uses his melee attack, only doing so if they are directly adjacent to him.

While he has no actual weakness, it is important to note that he deflects 1/3 of any melee damage dealt back to the attacker, so players should either bring lots of food or use Ranged or Magic.

During the fight, Lexicus will teleport around the room after losing certain percentages of his life points and yell "Almanac Army, attack!". This summons several Tomes of Magic, Tomes of Ranged, and Tomes of Strength. He will stop attacking during this time until he is confronted again. He summons his minions at the start of the fight and every additional time he teleports. The books' levels are equal to Lexicus's. They can hit often and high enough that they will be a nuisance as they grow in number, but they are easily killed in one hit.

Every once in a while, he will use his special attack when he yells "Book barrage!" and summons several red glowing books which then glide toward the location where the players were when Lexicus initiated the spell. They will explode and deal over 2000 typeless damage per book if the player does not run far enough from their initial location. The book barrage can deal very high damage if multiple books explode near the player at once, and they are capable of moving through the bookshelves in the room.

Generally, ranged and magic are valued over melee because 1/3 of all incoming melee damage will be deflected back to player. This includes damage from melee abilities, meaning that using high damage abilities such as Assault or Destroy could even cause players to kill themselves from the recoil. Meleers should bring extra food to compensate for the damage reflected.

Mages and rangers should use the best weapons available to them and quickly take out the books that are summoned. Area of effect abilities are ideal for this.

It is possible to use the Dungeon Home Teleport spell to escape the room. This is done by blocking his attacks with the walls and bookcases long enough to cast the spell. This can be very useful for players who are low on food and do not wish to die. However, it is still recommended that the player drop the Group gatestone outside the boss room and home teleport once outside. 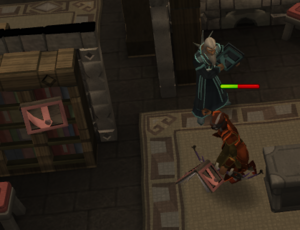 Lexicus casts "book barrage", summoning red books that explode on the spot where the player is standing.

Note: The Hoods and orbs are dropped together. It is a random combination of a hood and orb.

Transcripts Lexicus Runewright is the author or co-author of: