From the RuneScape Wiki, the wiki for all things RuneScape
Jump to: navigation, search
For the music track, see Blink (music track).
For the pet version, see Mini-Blink.

Blink is a Dungeoneering boss monster who can be fought on the Warped floors of Daemonheim, beginning at floor 48 and requiring level 95 Dungeoneering to encounter and fight. He is a crazed human test subject, driven mad by his love for portal magic, which is prominent both in his behaviour and means of fighting.

Blink's room has a unique appearance; there are 16 portals, four on each wall, and strangely coloured tiles on the ground in straight lines between them. A player can click on one of the coloured tiles (labelled as sunken pillars) to cause it to rise, revealing a pillar. 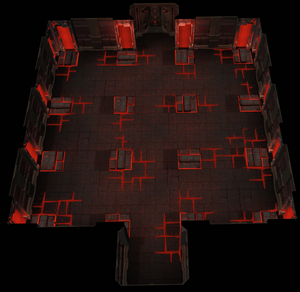 The room Blink resides in.

At the beginning of the battle, Blink cannot be attacked. He will appear at one wall portal and run across the room to the portal opposite it, spraying a steam-like area-based attack around him that can deal over 5,000 Magic damage and cannot be recoiled through Vengeance. Resonance will heal players from this attack. While he is still running, it is recommended to pray Protect from Missiles or Deflect Missiles; despite the attack dealing magic damage, these will reduce the damage more than Protect from Magic and Deflect Magic, which is a glitch. Hiding behind a raised pillar or staying five or more tiles away from him will fully negate the damage.

In order to stop Blink's rampage and start damaging him, one of the pillars directly in his path need to be raised. Once Blink hits it and stops, he will become attackable. The pillar cannot be raised if Blink or a player stands on it, and only one pillar in the room can be raised at a time. In order to get advance warning for the route Blink will take, players can check the minimap; before he makes his run across the room, his yellow dot marker will appear at one of the portals for a second. As Blink only runs north or east, a team of five can spread out along the northern and eastern sides of the room, each person covering 2 pillars, with the 5th roaming or covering a spot if someone dies. Alternatively, a single player can stand in the north-eastern corner of the room, wait for Blink to appear, and quickly run to raise a pillar in his path. This takes split-second timing, but it can be done by an experienced player. Note that the clickable areas of the tiles are larger than the graphics of the tiles themselves, so players should try to use the minimap when moving around the room to avoid accidentally raising a pillar.

Once Blink is stopped, he becomes rather weak, with the exception of one special attack. Most players choose to use Soul Split at this point. He attacks with magic, ranged, and melee. His melee attack consists of stabbing the player. His ranged attack consists of throwing a primal dagger at a player, although he may also turn around and instead throw the knife into one of the portals in the walls that then reappears as many knives spin out of several other portals, hitting everyone in the room several times. While stopped, he may also shout "Magicinyaface!" and immediately shoot an unblockable and undodgeable magic attack, although he possesses an ordinary magic auto-attack as well (this magic attack appears to deal ranged damage at present, which may be a glitch). He teleports away and resumes running across the room at 90%, 70%, and 40% of his maximum life points.

He has a special attack when stopped in which he will say "H...Here it comes..." followed by "Kapow!", releasing steam at all nearby players. This attack can deal over 8,500 magic damage (note that this hit can be recoiled, so tanking it with Vengeance is an option). It cannot be fully blocked by prayers, but raising a pillar and hiding behind it will negate the damage. It is recommended to activate Resonance in order to heal from this attack. If a shield is not available, the Smuggler sells a Novite kiteshield in the starting room. It is also possible to dodge this by teleporting out of the room or running far enough away from Blink. If Blink reaches a life point threshold at the same time he says "H...Here it comes...", it can result in the special attack being used at the same time as his normal running steam attack. The combination of these attacks is capable of killing players instantly, even from full health with full tier 11 armour. It is advised to teleport from the room if this occurs.

Using the Sundering Strike special attack of the melee Gorajo familiars can make this battle very fast, but familiars make it hard to raise the pillars in the room unless the player has disabled familiar left-click options.

Blink says the following quotes when running across the room and when teleporting away, all of which are voiced.

Transcripts Blink is the author or co-author of: