From the RuneScape Wiki, the wiki for all things RuneScape
Jump to navigation Jump to search
This article is about the Dungeoneering boss. For other uses, see Stomp (disambiguation). 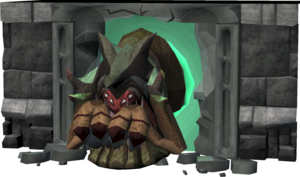 Stomp is a boss encountered in Daemonheim requiring level 35 Dungeoneering. He can be found on floors 18 through 29.

A behemoth, Stomp is so large that only his head can fit through the portal connecting the Behemoth's original location to Daemonheim (according to the Behemoth notes). Because of this, whoever brought Stomp into the dungeons set up a system by which the portal can be closed on its neck (decapitating it) should the need ever arise.

Stomp is an immobile boss fought in three stages. The goal is to close the portal by placing power crystals three times on both lodestones next to Stomp.

Stomp uses 5 attacks but initially uses only two. At any time during the fight, it can use a single-targeted melee attack and a multi-targeted ranged attack that throws small rocks at all players and also breaks debris left around the room. After the first stage, a single-targeted magic attack that consists of a glowing yellow orb fired out from its mouth is added to the mix. After the second stage, Stomp can use its most damaging move: a slow, single-targeted ranged attack that hits the player for 25% of their maximum life points, regardless of the player's armour (for example, a player with 8,500 life points would take 2,125 damage). The damage can be reduced with Protect from Missiles or avoided completely by running at least two squares away from the target location of the attack (the original position of the player). Although single-targeted, other players can take damage from this attack when it hits if they stand next to the player who was initially targeted.

Each time a third of its health is taken down, it will become invincible for a short time and cause debris and two power crystals to fall from the ceiling. When debris falls, the shadows on the floor indicate where it will land. It is recommended that players avoid standing on the shadows, as they will take damage equal to 25% of their maximum life points when the debris falls. Pick up the crystals on the floor and place them on the lodestones. The crystals fall before the debris, so it is possible to pick one up and activate a lodestone before all of the debris falls. Once the debris has fallen, it will block movement, but it can be removed with a pickaxe. If falling debris hits a player, it will not appear on the ground. The crystals must be picked up and placed on the lodestones on either side of Stomp within about 15 seconds, or it will heal itself to the previous stage (i.e. if it was brought down to 1/3 of its total life points, it will heal back to 2/3 of its total life points), and that stage will start over again.

There are three colours of lodestones; blue, green and red. Each colour will appear at a different phase; thus, players need not keep crystals from previous phases. 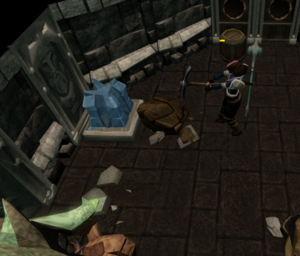 A player can mine the rocks blocking the lodestone. 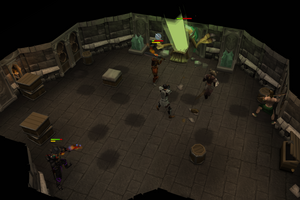 Stomp rains debris from the ceiling and becomes invincible.

Stomp's head is severed, and it dies.

Fallen debris often blocks progress by either blocking the lodestones or the power crystals. This can be very frustrating if it happens multiple times. An easy way around this is to pick up the crystals the first time that Stomp's life points are lowered and place them after they are reduced for a second time. The debris can be mined and destroyed, but due to the time it takes to mine the debris, it is still recommended to use this strategy if there is a large amount of debris on the ground.

On complexity 1, it is possible to skip putting in the last, or sometimes second-last, set of crystals. When the crystals have been put into place and the team is waiting for Stomp to become attackable again, it is possible for everyone in the group to attack at the same time, and if the damage is high enough, they will kill Stomp and skip the remaining phases.