From the RuneScape Wiki, the wiki for all things RuneScape
Jump to: navigation, search
For the music track, see Bulwark Beast (music track).
For the shield, see Bulwark of revenge.
For creature encountered during Thok It To 'Em, see armoured cow thing. 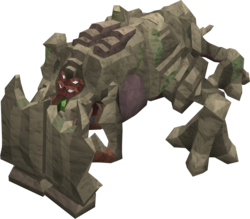 The Bulwark beast is a Dungeoneering boss found on Abandoned and Abandoned 2 floors (12-17, 30-35). It requires 23 Dungeoneering to encounter and is the second of the Behemoths encountered in Daemonheim, with the first being the gluttonous behemoth.

This monster is initially covered in stone armour which completely protects it from melee and ranged attacks, with the exception of crush weapons. The armour can be broken with a pickaxe (equipped in weapons slot or in the tool belt), which you can find in a rock at a corner of the room if you haven't already brought one. If using a tool belt pickaxe, it will look as if your weapon is breaking the armour.

The plating does not block any magic attacks however, so players can directly use magic to fight the beast. This method is highly recommended, as the armour takes a very long time to break, even for a low-level bulwark beast that is otherwise very easy to kill.

The bulwark beast attacks with all three combat styles: melee, ranged (green breath attack) and magic (electrical attack). It may also make rocks fall from the ceiling, dealing typeless damage, and stomp on players that move under it. The melee attack targets one player, but both the ranged and magic attacks are multi-targeted. The lightning attack is similar to the Kalphite Queen's magic attack. It bounces from player to player, and players behind the bulwark beast will be damaged by this attack. 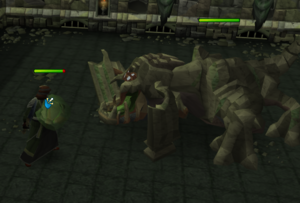 This boss drains the Prayer of those he is not focused on if they are using the Protect from Magic/Deflect Magic prayers. This only occurs when they get hit by the recoil of a spark attack.

Once the armour has been removed with pickaxes, players should switch to more powerful weapons. The bulwark beast hits often and quite hard, but has surprisingly low defence after its armour is removed. 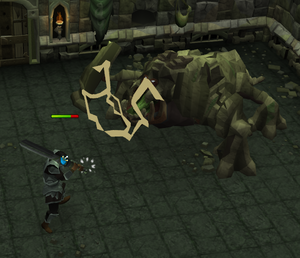 The bulwark beast electrifying you. 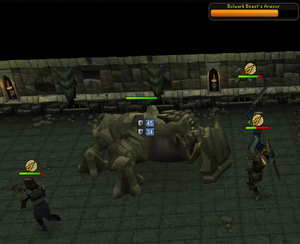 Players engaging in combat with the Bulwark beast. The blue hitsplat indicates the amount of damage the armour has received, with the total progress being shown in the bar above.