From the RuneScape Wiki, the wiki for all things RuneScape
Jump to: navigation, search
For the pet version, see Hope Nibbler.
For the music track, see Hope Devourer (music track). 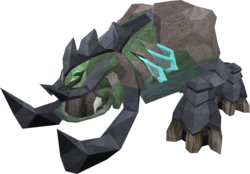 Killing a Hope devourer at least once is a requirement in order to own the hope nibbler pet.

The behemoth has four main modes of attack: the first is its aura attack, a special ability that deals damage to all players in the room, as well as lowering their combat skills, but which can be blocked with the use of Protect from Magic or Deflect Magic. The aura hits at regular intervals, always dealing the same damage depending on the behemoth's combat level.

The second attack is an extremely rapid melee attack that can be halved by praying against melee.

The third attack is a knockback attack that deals typeless damage equivalent to 25% of the player's maximum health and decreases their Defence by one level.

The fourth attack is prayer-eating attack that only affects players with protection or deflection prayers active, dealing massive damage, disabling prayers, healing the boss, and increasing its attack, strength, and defence. This attack is preceded by the beast roaring, so experienced players can avoid it by turning off their protect prayers quickly. Alternatively, players can opt to exclusively use Soul Split throughout the entire fight, as the boss's special attack does not affect this curse.

The boss's fifth attack is the standard stomp attack that behemoths use on players who stand under them. The Hope devourer's stomp attack deals damage equal to 1/6 of the target's maximum life points. 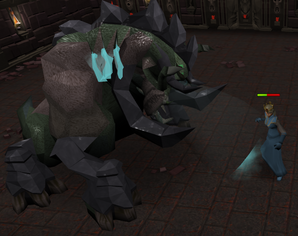 The majority of the damage players receive during the fight is from the defence draining shove attack. Protect and deflect melee do not help against this attack, so Soul Split and food, preferably Salve eels or better, are helpful.