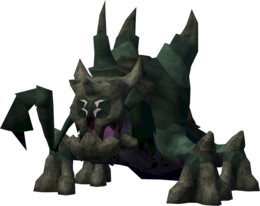 The Runebound behemoth is a Dungeoneering boss monster encountered on the Occult floors, requiring a Dungeoneering level of 71 to encounter and fight. It is a Behemoth that was created by imbuing Rune magic onto it as a way to tame it and make it more powerful. This method was developed by Lexicus Runewright.

The Runebound behemoth is a large beast with the ability to use all four protection prayers simultaneously. While these prayers are active, it is invulnerable to the corresponding damage (melee, ranged, magic, familiars), except Vengeance. Within the boss room are three active power crystals (one for each combat style) that must be deactivated to remove the respective protection prayer for 10 seconds. Players must wait about 30 seconds before they can deactivate each crystal again, meaning that 2 attack styles are advised. The protection prayer(s) currently active will be shown above the behemoth as with normal protection prayers. For example, when all three styles are protected against, the following icon displays:

It mainly attacks with both range and magic when the target player has no protection prayers activated. If a player activates Protect from Magic, the monster will exclusively use its range attacks, and vice versa. It will also use melee if the player gets within melee distance. The boss attacks slowly, but can deal considerable amounts of damage for its level.

The Runebound behemoth also has a special attack, in which it first roars, charging energy, then scatters yellow orbs into the air. This attack has a short delay before hitting the floor and thus hitting you. The attack splits into particles when released and explode on the floor, and can be evaded by calculating where they will land and running out of the way. If not avoided, each individual orb will deal over 1600 unclassified damage, easily causing death since the behemoth often creates 5 or more that will all hit at once. Surge or Escape can prove valuable in dodging the attack.

There are three ways to avoid the special attack:

It can only use its special attack if none of the 3 crystals are deactivated at any one time, and stops using it when even one of them is deactivated. Whenever it uses this special attack, it resets its protection prayers and the crystals, meaning you having to wait another 30 seconds until you can activate them again.

Like other behemoths, if a player runs under the Runebound behemoth, it will trample the player under its body, dealing unclassified damage. Caution should be taken when entering a room and running to deactivate a crystal. It will trample you immediately if you stand under it for even a second, which is a shorter time compared to the other behemoths. Getting trampled will give you the message "The beast tramples you."

One of the power crystals.

The idea is to constantly move between the crystals to de-activate one of the Behemoth's protection prayers, while changing combat styles accordingly. If a player carefully watches the protection prayer sigils over the monster's head, there should be no problem with the special attack.

By bringing in two types of attack, and deactivating the appropriate two crystals, the boss is easily defeated without it being able to get off a special attack. For example, a player might bring in range and melee weapons. The player runs to the Warrior Crystal, disables the boss's anti-melee prayer and attacks. When the melee prayer sigil re-appears over the monster's head, the player then runs to the range crystal and switches to a range weapon.

Due to the behemoth's damage output, players may consider using Vengeance spells. 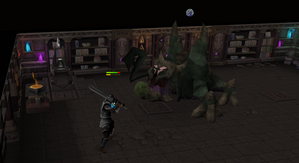 This information has been compiled as part of the update history project. Some updates may not be included - see here for how to help out!
Retrieved from ‘https://runescape.wiki/w/Runebound_behemoth?oldid=35495515’
Categories:
Hidden categories: