From the RuneScape Wiki, the wiki for all things RuneScape
Jump to: navigation, search
For the music track, see Plane-freezer Lakhrahnaz (music track). 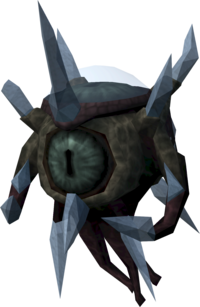 Plane-freezer Lakhrahnaz is a boss monster of the Stalker race that is found in the Dungeoneering skill and requires 11 Dungeoneering to encounter in the frozen floors. It is found on floors 6-11.

Due to the icy nature of its habitat, the player slides around when trying to move in the boss room. The boss exploits this by moving away from the player, or pushing the player back by turning its eye red. 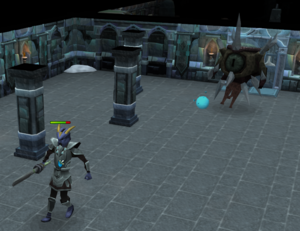 Plane-freezer has no real weakness. However, when fighting Plane-freezer it is easier to use magic or ranged over melee, because Lakhrahnaz both pushes you away and comes back toward you, thus interrupting melee combat. When its life points are low, Lakhrahnaz will move away from the player, making it even more difficult to kill with melee.

When Plane-freezer Lakhrahnaz spins around and throws ice spikes towards everyone, it is using its magic attack. When it flings its tentacles and a blue orb flies from its bottom, it is using its ranged attack. Its melee attack turns its main eye red and pushes the player back.

It has been observed that Plane-freezer Lakhrahnaz uses its ranged attack (blue orb) much more often, so Protect from Missiles is recommended unless you are wearing heavy melee armour. It rarely uses its melee attack, and as the attack also pushes you backwards, you should receive very little melee damage in fights.

If the Plane-freezer is set against one of the poles in its chamber it will stay there for a prolonged period of time. This can be a good strategy for players wanting to spend less time chasing it around. Another good strategy is to trap Lakhrahnaz between two players, preventing him from moving around.

The best tactic is to summon the strongest familiar possible. Your familiar will not be affected by your sliding around the room unless you get far enough away from it that it needs to respawn closer to you. Your familiar can simply walk over the ice to attack Lakhrahnaz. Doing this you only need to bring food, and a ranged or magic weapon and the boss will not last very long. Note that familiars can also be used to trap Lakhrahnaz.

A good team tactic versus Lakhrahnaz is to use the spell Vengeance Group repeatedly with as many teammates as possible, as its high hits will effectively damage himself. Vengeance or Vengeance Other are likely not worth the effort.

A good solo tactic is to back the Plane-freezer into a corner. It will not move, and the player slides straight back and forth across the room when it pushes the player away. In fact, once it is in a corner, work between Lakhrahnaz and the 'welcome mat' type steps in front of the doors, that way there is only a small space between it and your character.

Another tactic would be to bring a few casts of Gatestone Teleport, and leave the gatestone outside of the boss room. When the boss begins to move outside of the mat area, you can simply teleport out of the room, and this teleportation will lure him back to the entrance.