From the RuneScape Wiki, the wiki for all things RuneScape
Jump to navigation Jump to search
For the music track, see Hobgoblin Geomancer (music track). 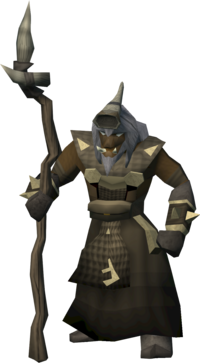 The Hobgoblin Geomancer, also known as Gra'Magor, is a boss monster encountered in the Dungeoneering skill. He appears as a boss when the player has achieved level 23 Dungeoneering, on floors 12 through 17, and later on floors 30 through 35.

Thok encounters a particular geomancer named Derek during the Thok Your Block Off saga.

The Hobgoblin Geomancer has various kinds of attacks and abilities. He uses a single-targeted melee attack, an Earth Blast spell that can be either single or multi-targeted, Entangle which can stop movement of player for 12 seconds, curse spells that weaken the player's stats (maximum 5% of all combat stats), and prayer-draining spell temporarily stop the player from praying (lasts 15 seconds). His spells can splash and do nothing.

The hobgoblin teleports himself around the room once in a while. He will teleport away from the player if he is adjacent with player, and vice versa.

If the player has any prayer active when he uses his prayer-disabling attack (which looks like a white ball), he will heal himself slightly and will drain the player's Prayer points as well. The only way to prevent this is to fight him without prayer. It is not a good idea to activate any prayers against higher levelled versions of this boss, as his defence is too high to counter the healing rate. If he disables the prayer of more than one player at the same time, he will only heal himself for one player.

He has no weakness, but since he teleports around the room occasionally it is easier to range or mage him. Additionally, he will only teleport far away from the player if the player attacks it with melee. He will teleport right next to the player and melee them if the player uses ranged or magic.

Another method to fight is to purely range the boss and try to run away when the Geomancer teleports near the player, such that he will be forced to use magic. This way, ranged armour will provide the best attack and defence bonus.

The Freedom ability can be used to break the binding spell.

Ideally, the best way to kill this boss is to use a gatestone (not group). Melee the boss and wait until you get stunned. Then either teleport to your gatestone or use freedom. This will stop the stun and allow you to continue attacking.

Transcripts Hobgoblin Geomancer is the author or co-author of: 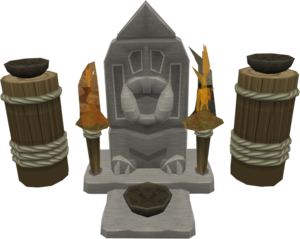