From the RuneScape Wiki, the wiki for all things RuneScape
Jump to navigation Jump to search
For the music track, see Icy Bones (music track). 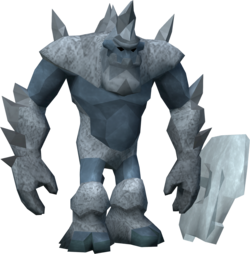 Icy Bones is a Dungeoneering boss and one of the first bosses players can encounter in the frozen floors. His special abilities include summoning stalagmites and freezing enemies. He is generally regarded as one of the easiest bosses to defeat in Daemonheim.

At higher levels he can easily hit over 500 damage with his multi-target melee attack. If fighting in a group, it is more difficult to range or mage Icy Bones because you are more vulnerable to his stalagmite attack. 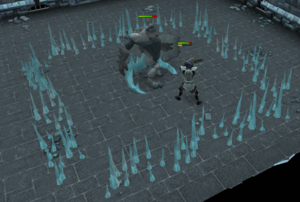 Icy Bones' primary form of attack is melee. This attack can be used at a distance. The sign of this attack is the blue circle that appears under him. Be aware that some of Icy Bones' melee attacks can hit everyone in a one tile range. Protection prayers do NOT offer their full protection against his melee attacks, and the message, "Your prayer only offers partial protection against the attack" will appear in the chatbox.

The secondary attack is to freeze players at a distance from him. Once frozen, players will be rendered unable to move and attack for a few seconds. The Freedom ability can be used to break the effect.

Icy Bones' special attack is making stalagmites appear out of the ground. They rise up then go down and they can block player movement. Players can predict this attack when Icy Bones has a stalagmite wall appear around his feet. This attack should not bother melee users, as they will stay next to him and will not get hurt. Run out of the way of the stalagmites once they come up to prevent damage. These stalagmites can completely surround Icy Bones, so you may need other methods of attack such as Range or Mage. This attack cannot deal damage to solo players as the spikes will never spawn directly under you.

Fighting Icy Bones is quite simple and applies regardless of level. All combat styles work against him well. Use Protect from melee/Deflect melee as melee is his most common attack. If he freezes you, use Freedom to free yourself and avoid any stalagmites spawning under you if you're fighting Icy Bones with a group.