From the RuneScape Wiki, the wiki for all things RuneScape
Jump to navigation Jump to search
For the music track, see Unholy Cursebearer (music track). 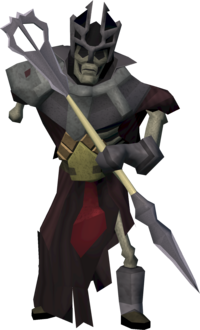 The unholy cursebearer is a boss in Daemonheim, requiring 29 Dungeoneering. He can be encountered on floors 15-17 and 30-35, all of which are abandoned floors.

Thok encounters one he calls Bone Face during the Thok Your Block Off Fremennik Saga. 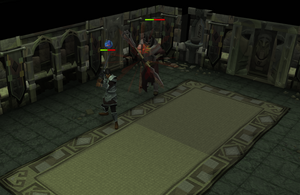 The unholy cursebearer afflicts the player with undead rot that will constantly drain their stats every few seconds and deals minor typeless damage. There are two unholy fonts on the wall opposite the entrance which allow for restoring one's stats from the undead rot. However, either may not be used until notified by the chatbox, after the undead rot works through the player for some time. Using the unholy fonts will also heal the unholy cursebearer by 1/8th of his maximum life points. Therefore, it is strongly advised use them only when needed. There is no minimum limit for the stat draining, he will eventually drain all of a player's combat stat to zero if the fight is long enough. The stat drain will prevent the use of abilities or teleports if a player's stats drop below the level requirements.

This boss uses a standard melee attack and a magic attack in which red energy appears on top of his staff and spell that looks very much like Iban Blast is fired at the target. The magic attack can either be single-targeted or multi-targeted.

There are various tactics that can slow or negate the stat drain of the rot, such as stat-boosting potions. Turning on the Rapid Restore prayer will cause your stats to regain some points in the duration of the fight. However, this prayer's effect is relatively slow, compared to the drain rate of the undead rot. Bringing a shield and using the ability Rejuvenate may be helpful as long as the player's Defence level does not drop below 52.

A slower strategy to avoid the stat drain and any damage is to use a gatestone. Place a gatestone outside the boss room and enter just long enough to hit him twice before teleporting out. If done right, no combat stats are lost. Keep in mind that regular gatestones can only be used once, so utilising a group gatestone works better.

It is worth noting that the Unholy Cursebearer is not immune to damage-over-time attacks. This is especially useful when paired with the 'Gatestone strategy', as he will be hurt even when the player is outside of the boss room.