From the RuneScape Wiki, the wiki for all things RuneScape
Jump to navigation Jump to search
This article is about the Elder Artefact. For the quest, see The Elder Kiln. 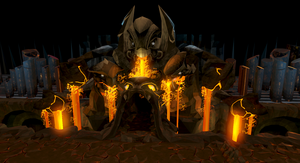 There are two parts to the Kiln - the arena in which the TokHaar duel each other, and the TzKot-Zo, an ancient conduit that flows the Kiln's lava throughout the entire volcano.

Upon starting a new world, Ful would send the Elder Kiln deep beneath the surface, where the sacred lava met the sacred clay and created the TokHaar to advance their work. If the world did not meet the Elder Gods' expectations, the TokHaar would return to the Kiln, where Ful ripped it out from the planet and brought it with her to the next one. The Elder Kiln is currently on Gielinor along with many other elder artefacts.

The Kiln remained deep in the volcano, undisturbed until the Second Age when a human warrior named Zuk learned of its existence and traveled to the Kiln. Defeating all of the TokHaar, he was given the title "TzKal" (champion of the fire) and claimed the Kiln for himself. He remade himself in the Kiln, attaining demigod-status, but because of his will, he retained his individuality that the TokHaar lacked. Ful appeared to have tolerated his "claim" on the Kiln.

Following the TokHaar's failure at the Battle of the Monolith, Ful directed the TokHaar into the Kiln, remaking them as the TzekHaar, unified in purpose for battle. As the champion of Ful, TzKal-Zuk was chosen to lead the TzekHaar into battle.