From the RuneScape Wiki, the wiki for all things RuneScape
Jump to navigation Jump to search
For the music track, see Flesh-spoiler Haasghenahk (music track). 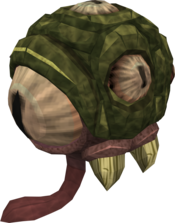 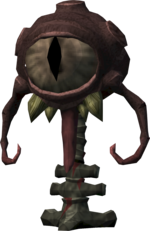 Flesh-Spoiler Haasghenahk is a Stalker monster that can be found within Daemonheim while training the Dungeoneering skill. It is only encountered on an Occult floor from floor 42 to floor 47; thus, a minimum level of 83 Dungeoneering is required to encounter this monster.

The boss has very accurate attacks. Haasgehnahk attacks with melee by forcing its main eyeball out of its socket onto the player. The main eye flashes teal when using its magic attack.

Because of the Flesh-spoiler's huge size, it has a stomp attack in its first form. If any player stands beneath it, they will be dealt typeless damage along with the message "The creature slams down on you from above!"

Once defeated in its first form, it will explode, revealing its inner core, and release five Flesh-Spoiler spawn, that only focus on one player in the room. The Flesh-Spoiler itself is immobile and does not attack in this form other than the unblockable damage attack. Once the Flesh-Spoiler dies, so will any remaining spawns.

A blood necklace is very useful if being targeted by the spawns.

Bracketed is the second form.