From the RuneScape Wiki, the wiki for all things RuneScape
Jump to: navigation, search
This article is about the Fight Kiln monster. For the Fight Cave boss, see TzTok-Jad. 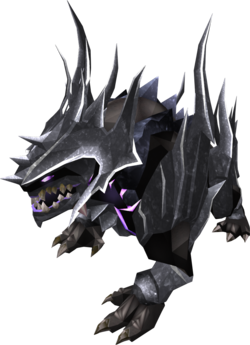 TokHaar-Jad is a monster encountered during the Fight Kiln minigame. It is similar to TzTok-Jad of the TzHaar Fight Cave, attacking the player with all three combat styles. However, TokHaar-Jad has a higher combat level and boasts an even higher maximum hit than TzTok-Jad of 10000+ damage, and unlike TzTok-Jad, it does not spawn Yt-HurKot or any TokHaar equivalents.

Killing TokHaar-Jad does count towards TzTok-Jad reaper assignments, so it can be used as a faster alternative if the player has access to the Fight Kiln.

TokHaar-Jads appear on waves 10, 20, 30, 34, 35 and 36, alongside other powerful monsters. The only exception is in wave 36, where two TokHaar-Jads appear instead. To defeat them with minimal hassle, lure them towards the rock in the middle. This can be done by standing on the tile directly north of the rock in the middle on the eastern tile of the two that are directly north. If you start off the wave standing on this tile you can fight them one at a time and not have to take hits from both simultaneously. The invulnerability crystal allows for open combat until it wears off after 30 seconds.

Fighting TokHaar-Jad requires care and patience, just like TzTok-Jad. A sharp eye, swift reflexes and being calm is vital when fighting TokHaar-Jad; one mistake can set off a panic which can result in the player's death.

An alternate method (sometimes known as "flinching") where the player quickly runs out from behind the rock, attacks, and runs behind the rock before the TokHaar-Jad can retaliate can be done if uncomfortable with prayer switching. This method takes longer, however, and it cannot be done on wave 36 (double Jad wave), since it only works on one Jad. However, keeping one Jad behind the rock allows prayer switching on the other Jad. Alternatively, use an invulnerability crystal to defeat one or both Jads.