From the RuneScape Wiki, the wiki for all things RuneScape
Jump to: navigation, search
For the music track, see Astea Frostweb (music track).

Astea Frostweb is a Dungeoneering boss. There is no Dungeoneering level requirement to fight her. She can only be encountered in frozen floors.

She summons ice spiders while attacking the player directly with magic. She also randomly alternates among the prayers Protect from Melee, Protect from Ranged, and Protect from Magic while in battle.

The 18th part of Bilrach's journal revealed that they confronted Bilrach, Bilrach defeated them, placed them under his control and separated them forever as punishment for their rebellion.

Her main attacks are a melee attack that can hit diagonally, an ice spell similar to Ice Barrage which freezes the player temporarily for 5 seconds, and an avoidable spike attack which targets all players. The spike attack appears as icy spikes growing on the ground and deals damage immediately after they appear, not when they disappear, making it hard to evade them. The damage from the spike attack is not classified as any specific type of damage, and is therefore unaffected by protection prayers and Resonance, although other abilities such as Anticipation and Debilitate do reduce the damage. Protect from Magic should be used to reduce the damage from her Ice Barrage, although Soul Split can also be used if you are able to maintain a steady damage output against her.

Astea summons ice spiders, the levels of which are determined by the raid's average level and difficulty. She summons two per person, for up to 10 at once for a party of five. If you're alone she can summon up to 6 spiders; however, it is possible that she does not summon any at all. According to the Smuggler, Astea will summon more spiders to attack players with Protection prayers activated. When Astea is killed, her summoned spiders will also die, so ignore them and focus on Astea.

The ice spiders hit low (with a max hit of 70 life points at their highest level) but with very high accuracy, unless the player wears good armour. Protect from Summoning can help reduce the damage dealt by the spiders. Low levels either protect from melee or magic should be used; however at higher levels or with good armour, Protect from Magic or Soul Split are more effective. 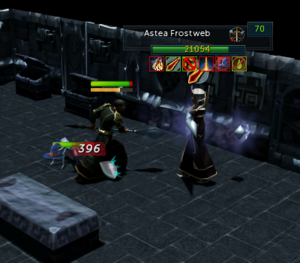 Astea Frostweb and her minions.

Astea is weakest against Ranged, followed by Magic, and is most resistant towards Melee. Because her Ice Barrage can keep the player at a distance, fighting her by alternating between ranged or magic attacks or summoning a combat familiar may be easier. Melee can also be used effectively, however, if you can stay close to her. Holding spells are ineffective due to her immunity to stuns. Anticipation and Freedom may prove useful in the battle.

When she freezes a player within melee range, she takes one step backward, much like forgotten mages. This makes melee slightly less effective than ranged or magic, though this can be countered by using movement abilities such as Barge or Bladed Dive, or by simply clearing the bind with Freedom. Those with weapons for two combat styles have an advantage as they can switch weapons when Astea changes prayers, particularly by alternating between ranged and magic.

If you manage to trap her in a corner, she cannot move after freezing you.

Watch her to see what she is protecting from before entering the room to minimise the potential time she prays against your style; e.g, if you are using melee, wait for her to Protect from Melee, then enter the room as soon as she changes.

Transcripts Astea Frostweb is the author or co-author of: