From the RuneScape Wiki, the wiki for all things RuneScape
Jump to: navigation, search
For the music track, see Night-gazer Khighorahk (music track). 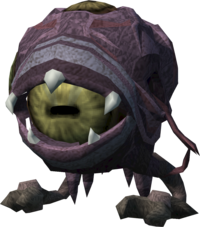 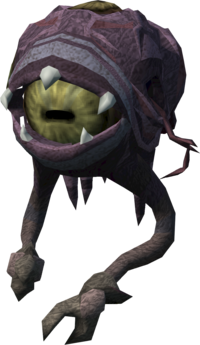 Night-gazer Khighorahk is a Dungoneering boss belonging to the Stalker race which may be encountered on floors 26 through 29 of Daemonheim. It requires 51 Dungeoneering to encounter.

As revealed in the Stalker notes, Khighorahk had appeared once in the notes' writer's private room and had created a nest to breed. Bilrach then decided to use it as a guard in the dark room.

There are four Pillars of light, each in a corner of the room. It is necessary to light at least one pillar, or the Night-gazer will be completely invincible. The more pillars that are lit, the more damage can be dealt onto the boss. The pillars go out occasionally (very often if Night-gazer uses the special attack, and more often as more players are in the team), so it is beneficial to have a teammate standing next to each pillar during the fight. However, standing near a pillar of light (2 spaces or less away) when it goes out will deal over 1000 typeless damage. The pillars will stay lit longer if the player is soloing the dungeon.

There are two stages in this boss battle. When the Night-gazer dies the first time, it will heal to full health and players will have to kill it a second time to finally defeat it. However, in this second stage, the Night-gazer will have a lower combat level and the pillars will remain lit for the duration of the fight, lighting themselves if they were unlit previously. It is initially immobile, but it hovers in the air in its second form, allowing it to move around the room.

The Night-gazer has a powerful special attack where it jumps into the air with a bluish sphere around it. This must be avoided by quickly running away because it will deal upwards of 8,500 typeless damage to any player still standing next to it when it lands. This powerful move is only triggered if a player is within melee range of the Night-gazer, meaning that ranged and magic users will not encounter it. Resonance will not heal from this attack.

In its second form, it gains the ability to stun the player, making it difficult to avoid the special attack unless Freedom or Anticipation are activated.