From the RuneScape Wiki, the wiki for all things RuneScape
Jump to: navigation, search
For the music track, see Dreadnaut (music track). 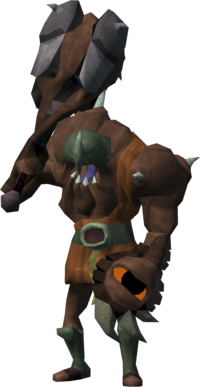 Dreadnaut is a boss monster encountered on the Warped floors who requires level 95 Dungeoneering to encounter. He is the former captain of the Rammernaut guard, Hoskins, who has been corrupted by the tainted magic that affects the Warped floors due to their closeness to The Rift. His maul and shield have fused with the flesh in his arms, his mouth has become row of spiked tendrils, he has grown a lump on his back, and an eye has emerged on his shield.

He requested several unusual items from command, including 20 Bovimastyx, 200 rotten bouldabass, 100 human carcasses, and 10 salve sacks of bones. However, the resource requisition orders were childishly written, barely legible, and coated in a strange jelly-like substance. These, along with the unusual nature of the requested items themselves, prompted the request to be forwarded to the new head of guard for disciplinary action. Two Brutes were sent to meet with Hoskins, but were killed by him as they argued about whether he was still their leader or not.

His main method of attack is meleeing a player with his maul. His melee attack is always followed by a ranged attack - an orange blob launched at players - a tick (sometimes simultaneously) later, which is fired at all players in range.

His special attacks consists of him spawning orange blobs on the ground that may appear when he melees a player. They last for a while and deal typeless damage and drain prayer points and Defence levels if stood on. He can point his eye-shield at a player and emit a red beam, dealing typeless or ranged damage and disabling protection prayers and deflection curses for a few seconds.

If his target continuously runs away from him, staying out of melee range and preventing him from attacking, he will say "You can't run forever!", emitting a multi-targeted scream attack that lowers damaged players' attack, magic, and ranged levels.