From the RuneScape Wiki, the wiki for all things RuneScape
Jump to navigation Jump to search
For other uses, see Gravecreeper (disambiguation).
Not to be confused with Gravedigger.
For the creature encountered during the Thok Your Block Off saga, see A face only his mum loves.

Atlus Creeper the Gravecreeper is a Dungeoneering boss monster that can be fought on the Occult floors (36 to 47) of Daemonheim, requiring a Dungeoneering level of 71 to encounter and fight.

He sometimes shouts "Buuurrnnnn!", and then surrounds himself with a 3x3 square of puddles of purple liquid (somewhat like the portals summoned by Bal'lak the Pummeller). Being near the boss when he releases this attack will disable your prayers—though they can be turned on again almost immediately—and continuing to stand on the liquid will deal rapid damage and drain 20 prayer points per hit. The puddles can deal over 1000 damage, so players should step out of it quickly.

The Gravecreeper's special attack occurs three times during the fight when he reaches certain health thresholds. He digs into a plinth (shouting "Burrrrrry", "Digggggg", or "Brrainnns" just before) and then a number of the plinths in the room start to glow with a purple colour, and a few purple clouds appear. After a few seconds, all of the glowing plinths will explode, releasing purple clouds and surrounding themselves with purple puddles that function like the boss's attack, dealing significant damage to players who stand on them.

When the plinths explode, they will also disable prayers and drain prayer points. They will also lower your defence by up to half. The puddles will remain on the arena for a long duration of time. The purple clouds will not disappear, and shoot out and split. This can be avoided by running away from them, or teleporting out via gatestone.

You can prevent the tombs from exploding, by quickly cleansing the tombs that turn purple. This costs prayer points, but immediately brings the boss out from under the plinth and prevents the affected plinth/s from releasing the puddles of purple liquid. It is best to cleanse a few of these tombs, in order to have safe ground to stand on while killing the boss. If you have no prayer points, you will be able to bless the tomb, but you will be dealt damage instead.

When the boss re-emerges the room will be partly filled with purple liquid, and he is likely to be standing in the middle of it.

Be sure to turn auto-retaliate off when fighting with melee during this battle. Otherwise, the boss's attacks may lure you onto the unsafe purple puddles that the room will be filled with. 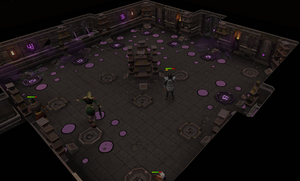 Players need to constantly be on the look out for his special attack and move away when necessary to prevent huge amounts of damage. The safest places to evade the special attack are the dents in the room where the boss door is and the exit ladder. This way you can avoid the lightning strikes and puddles. Cleanse as many as tombs as you can. It is possible for nearly no puddles to appear during the special attack if the party is spread out and cleanses tombs quickly.

If the boss is standing in an area completely covered by purple liquid after the tombs explode, it can be too dangerous to melee him. In order to move him off the liquid, every player on the team should teleport out. The boss will follow the last player he was attacking, and that player can move around outside the boss room in order to lure the boss to a safer area. Note that no matter how full of puddles the room becomes, the two squares near the entrance will never be covered by purple liquid from the boss's special attack. They can, however, be covered by his "Burrrnnn!" attack. This allows a narrow area for the boss to be killed in if necessary.