From the RuneScape Wiki, the wiki for all things RuneScape
Jump to navigation Jump to search
For the music track, see Shadow-forger Ihlakhizan (music track).
For the boss encountered during the Fremennik saga Thok It To 'Em, see Thing with eyes.

Shadow-Forger Ihlakhizan is a Dungeoneering boss monster, one of the Stalker race, that requires level 59 Dungeoneering to encounter and fight. It can only be encountered in the Abandoned 2 set of floors.

Ihlakhizan is seen suspended over a deep pit, hanging by four tentacles wrapped around the pillars on the corners of the hole.

Its first attack is a multi-targeted melee attack in which Ihlakhizan moves its body in a circle, hitting anyone adjacent to it. Its second attack is a single-targeting attack consisting of an orange beam shot from the top of its body that has an attack speed of 7. It has a slight delay compared to its other attacks, but can be followed by them immediately. Protect from Magic will not nullify this attack, as it is considered unclassified damage. This attack can deal over 1000 damage if Ihlakhizan's level is high enough.

The Shadow-forger, suspended above a deep pit.

Ihlakhizan has three special abilities as well: its first special ability is a ranged attack consisting of a green acid; spurting from the top of its body which may lower defence from each hit. This is an area-effect attack which ignores armour and is only partially blocked by Protect from Missiles, but it can be dodged by running with fast reactions. Players can be hit by multiple overlapping blobs, making this attack particularly deadly to those further away as well as those up close.

Its second special ability is a stat-draining flash attack. Ihlakhizan will start to glow, then give off a burst of light within a few seconds. If a player gets caught, they will sustain massive damage and their Attack, Strength, Defence, Ranged, and Magic stats will be reduced by approximately 33% of their current levels. To avoid it, players must stand behind one of the pillars Ihlakhizan is connected to. The player will be notified by the chat box when Ihlakhizan starts to glow. Similarly to its acid attack, prayer and armour will not nullify the damage from this attack. Gatestones can be used to escape the attack, but the player's stats will still be reduced.

The Shadow-forger's third special ability consists of a clawlike shadow that attacks players who hide behind the pillars for too long. The damage dealt is typeless. The boss will not use this attack when in the process of charging its stat-draining flash attack.

Ihlakhizan's orange beam attack cannot be blocked by Protect from Magic, so it best to use Protect from Melee (if the player is in melee range) or Soul Split instead.

Attack Ihlakhizan and heal from its attacks as necessary until it charges its light attack. Move behind the pillars until the attack is finished, and immediately move back in front of the boss to continue the battle and avoid the shadow attack.

If hit by the stat draining attack, it may become impossible to escape with Group Gatestone Teleport (64 Magic) without a stat restore or magic potion of some type. Gatestone Teleport (32 Magic) may be used instead, provided that Create Gatestone was used beforehand. This is particularly tough for free players as they do not have access to Herblore; Rapid Restore is the only option.

Shadow-Forger Ihlakhizan represents a massive jump in minimum combat level (91) from the previous boss Night-gazer Khighorahk (7). It is tied with Bal'lak the Pummeller for the highest minimum combat level among f2p Dungeoneering bosses. While the level 91 version has a very low max hit, its defence is quite high for the low-level players that can be pitted against it. This makes it especially vital to avoid the stat drain in f2p, as it can make the fight very long.

Currently it appears that Ihlakhizan does not use his shadow claw attack, allowing playing to rest and restore stats by hiding behind the pillars where it can't attack them. 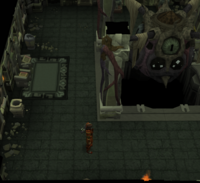 Ihlakhizan cannot attack players who are standing in a "blind spot" near a pillar.

Arrows shot and knives thrown at Ihlakhizan as basic attacks are lost and cannot be retrieved. 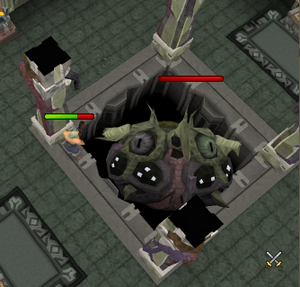 Thok defeats the 'Thing with eyes'.

In Thok It To 'Em (saga), Thok fights this boss soon after he defeats Stomp with his brother Marmaros. It is called Thing with eyes. When killed, Thok takes the eye of the Shadow-forger, though it is unknown how Thok can collect the prize before the Shadow-forger falls into the pit.

NOTE: There is a glitch in team Dungeoneering that prevents items from being dropped if more than one person is credited for the kill of a Boss monster. This glitch applies to all bosses, and prevents them from dropping their category of item (e.g. Kiteshields, Spears, Rapiers) when they would have a guaranteed drop of a certain category, depending on the boss. This may apply to "Journal" drops as well.

This information has been compiled as part of the update history project. Some updates may not be included - see here for how to help out!
Retrieved from ‘https://runescape.wiki/w/Shadow-Forger_Ihlakhizan?oldid=35630238’
Categories:
Hidden categories: