From the RuneScape Wiki, the wiki for all things RuneScape
Jump to: navigation, search
For the music track, see World-gorger Shukarhazh (music track).
"World Gorger" redirects here. For the reward from the third world event, see World Eater armour. 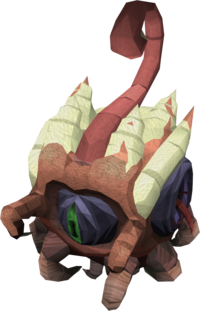 World-gorger Shukarhazh is a Dungeoneering boss monster that can be fought on the Warped floors of Daemonheim, starting at floor 54 and requiring level 107 Dungeoneering to encounter and fight. It is the final and strongest Stalker encountered in Daemonheim. 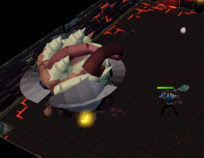 Shukarhazh is made up of four parts: the main body, which is the boss proper, and three eyes on the walls that serve as extensions to its body. The eyes are the Famished melee eye, range eye and mage eye. These three eyes determine the boss's defences, and cap the damage to the boss as well. The Famished mage eye is weak to arrows, the ranger-eye to slash and the warrior-eye to fire spells. The eyes do not die permanently when they are killed; they change their names to "Engorged eye" for 30 seconds, after which they reopen with the message "The creature shifts, and one of its many eyes opens." and resume attacking players. This reinstates the damage cap, and the eyes need to be closed again.

This boss has four attacks:

The World-gorger will heal itself completely if left out of combat, which may be a glitch.

When all three eyes are open – as they will be at the start – damage against the World-gorger is capped at 200 damage. Players must attack the eyes to lift the damage cap. Destroying an eye will cause it to close, raising the cap to 1000 damage, and closing two eyes removes the damage cap completely. However, if all three eyes are closed, the main body becomes completely immune to attacks. 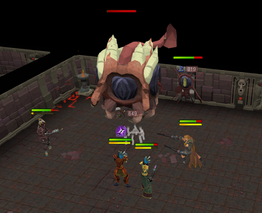