From the RuneScape Wiki, the wiki for all things RuneScape
Jump to: navigation, search
Dominion staff? (edit)

The Dominion staff is a reward from Dominion Tower. It requires 90 Magic to equip, and can only be used within the tower. It is received as a random reward through the rewards chest determined by how high a player's dominion factor is. It can only be used in the arena but can be equipped anywhere inside the tower. Upon leaving the tower, the Dominion staff will be unequipped or stored in your bank if your inventory is full. If both are full, it will be dropped. This weapon degrades to dust based upon how many hits you deal with it.

The Dominion staff provides infinite elemental runes when equipped - this effect only works with combat spells. This allows for free casting of standard elemental spells, and reduces the costs of Ancient Magicks spells to only the necessary death or blood runes. The staff can be unlocked as a possible reward after using all 3 types of bombs and a Help horn in the tower. All four of the power-ups do not need to be used in the same wave. Once unlocked, the staff can be obtained as a rare reward from any chest. As with the other Dominion weapons, the Dominion staff will not stack in a player's bank, even if all the staves have never been used. 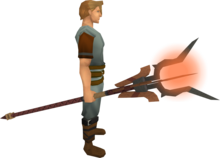