From the RuneScape Wiki, the wiki for all things RuneScape
Jump to: navigation, search
Mindspike (air)? (edit)

Only one mindspike can normally be obtained at a time; however, this can be circumvented by changing the mindspike to any element other than air. This is because the mindspike is always obtained from Gudrik in its air form. Mindspikes of the same element will stack in the bank. This will not work if the player has a Tower mindspike in their inventory or bank however.

The mindspike has a special attack, as do its melee and ranged equivalents, the keenblade and quickbow. 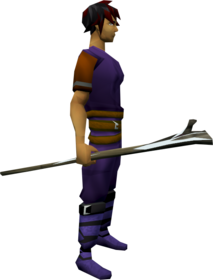 The mindspike's special attack is Rune Flame. This costs 75% adrenaline and blasts the target with 25% increased accuracy for 100-150% weapon damage.

The update history project is a work-in-progress – not all updates to this topic may be covered below. See here for how to help out!
Retrieved from ‘https://runescape.wiki/w/Mindspike_(air)?oldid=29588735’
Categories:
Hidden categories: