It is first made during the Lost City quest, which requires the player to defeat the Dramen tree spirit to obtain the branch and allows players to enter Zanaris by entering a shed in the Lumbridge Swamp while wielding it. If players have completed the quest and lost the staff, they may cut as many branches as desired from the dramen tree without being attacked by the spirit. More than one can be made both during and after the quest. It cannot be made using the Assist System.

Players doing Lunar Diplomacy can upgrade it to a lunar staff, and it will have the same effects. Only one staff may be upgraded this way.

The Dramen staff is also required for fairy ring teleportation if A Fairy Tale III - Battle at Ork's Rift is not completed. After the quest, the staff has very little use, assuming the player has completed Lunar Diplomacy.

The dramen staff has the same appearance as a normal staff.

A player crafting a Dramen staff 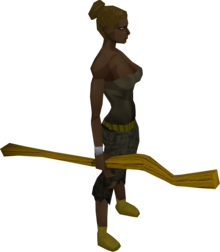