The mystic steam staff is the second most powerful steam elemental staff, right after its limitless level 82 version. It requires level 40 Magic to wield. It provides an unlimited amount of water and fire runes. To create one, a player must take a Steam battlestaff to Thormac after completing the Scorpion Catcher quest, along with 40,000 coins, (27,000 after completing the Seers' Village Hard tasks.) This upgrade boosts the staff's level by 10.

Assuming the Seers' Village Hard tasks have been completed, each steam battlestaff upgraded into a mystic steam staff would yield a profit of 14034 coins.

With 85 Crafting, players may attach a shade skull to the Mystic steam staff, creating a Necromancer's steam staff.

Requiring 75 Crafting, the staff can be upgraded into its level 82 version by combining with it an elemental impetus and the talismans of the respectively provided rune. 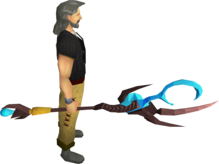 The steam battlestaff was released on 28 August 2007. The staff used to look no different from a staff of air except that it had a very slight blue tint to it, however, it received two updates afterwards.