From the RuneScape Wiki, the wiki for all things RuneScape
Jump to navigation Jump to search
Not to be confused with Ascendancy mine.
Not to be confused with Diminutive bomb.
Item JSON: {"edible":"no","disassembly":"no","stackable":"yes","stacksinbank":"yes","death":"never","name":"Dominion mine","bankable":"yes","gemw":false,"equipable":"no","members":"yes","id":"22371","release_date":"1 November 2011","release_update_post":"Dominion Tower","lendable":"no","destroy":"You'd have to get another from the Dominion Tower face.","highalch":false,"weight":0,"lowalch":false,"tradeable":"no","examine":"So volatile, careful how you handle it.","noteable":"no"}

Dominion mines are a reward that can be purchased after killing 400 bosses and finishing all special challenges, with the exception of Sunfreet, within the Dominion Tower. Each mine costs 1000 coins, with 10 mines purchased at a time from the Strange face.

Only two dominion mines can be placed per minute, although if picked up, players can immediately place them again. It is displayed as two 1-minute status effects for the two mines separately, allowing players to track when they can place a mine and when they can place another. If there is a valid target in range, starting from the moment that "Deploy" is clicked, it takes about 5 seconds for a mine to go off. If not triggered, a mine lasts for 1 minute before despawning, causing it to be lost. 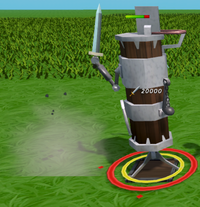 A dominion mine exploding on a dummy, which has a damage cap twice as high as normal.

These mines always hit 20% of the monster's maximum life points, up to 10,000 melee damage. They are always single-target, hitting the mob within a 7x7 area. They prioritise the closest target, not the target the player is attacking.

Dominion mines can only be triggered by NPCs of level 138 combat or less, making most bosses immune to them.

They are useful against monsters with high life points, such as rune dragons. Monsters will not become aggressive when hit by a mine. Note that mines can only be used to damage the target, the killing blow must be dealt by the player. Mines placed on an NPC with life points lower than the damage the mine would deal will not detonate.

Poison effects can be applied to monsters by damage from Dominion mines.

Curse and Vulnerability cast on the target would cause Dominion mines to deal 5%/10% more damage (21%/22% maximum lifepoints).

The Dragon Slayer, Demon Slayer, and Undead Slayer perks (+7% damage) will raise the damage from 20% to 21.4% of maximum lifepoints against the respective monsters.

Shattered Worlds mobs only take 20 damage from the mines. They cannot be used inside the Dominion Tower itself, nor in the Sunken Pyramid.

Dominion mines are not kept upon death, and will disappear if the player dies with them.

Note: 400 kills in dominion tower is required plus all of the following for special matches

Some monsters fit well within the parameters of having a combat level of 138 or lower as well as a large life point pool. These monsters are susceptible to taking the maximum or close to maximum amount of damage from dominion mines, which can help speed up certain Slayer tasks.