The Zamorak staff is a type of God staff that is obtained after completing the Mage Arena minigame. Like the other God staves, this staff requires level 60 Magic to acquire and therefore wield.

To get it, Kolodion the mage in all of his different forms, must be defeated. Either speak to the merchant after worshiping the statue of Zamorak or buy one off the merchant for 80,000.

The Zamorak staff has a special attack which may be used after the Divine Storm spell has been cast at least 100 times on the mages in the Mage Arena.

Neither the God staves nor the God capes have any effect whatsoever on Divine Storm. 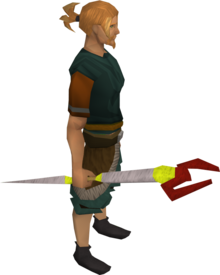 The Zamorak staff's special attack is Flames of Zamorak. On a successful hit, it deals 140%-300% ability damage and lowers the target's Magic level by 5% of the previous level. In order to unlock and use this special attack, the Divine Storm spell must be cast 100 times on the mages inside the Mage Arena.