The Guthix staff is one of the God staves that can be obtained after completing the Mage Arena minigame. Like the other God staves, this staff requires level 60 Magic to acquire and wield.

To obtain it, the player must defeat Kolodion the mage in all of his different forms. Either speak to the merchant after worshipping the statue of Guthix or buy one off the merchant for 80,000 coins.

The Guthix staff has a special attack that can only be used after the Divine Storm spell has been cast 100 times on the mages in the Mage Arena.

Neither the God staves nor the God capes have any effect whatsoever on Divine Storm. 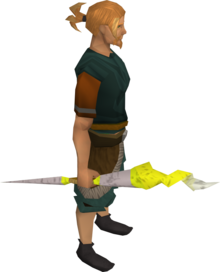 The Guthix staff's special attack is Claws of Guthix. It costs 25% adrenaline and deals 140%-300% (220% on average) ability damage. On a successful hit, this lowers the target's Defence level by 5% of the previous level. It also applies a debuff that increases the target's affinity values by 2; this affinity increase lasts for one minute. In order to unlock and use this special attack, the Divine Storm spell must be cast 100 times on the mages inside the Mage Arena (players need not do this if they have already cast the original god spells 100 times within the Mage Arena before the spells' removal).

This special attack is incredibly useful against monsters with high Defence and low affinities. It may be stacked with Quake (2 stacks) and Statius's warhammer (5 stacks) special to increase the target's hit chance value by 9, making them much easier to hit.

It is often used at high-level bosses such as:

Even against monsters that the player already has high hit chance on, the special attack remains useful for its high damage output.