From the RuneScape Wiki, the wiki for all things RuneScape
Jump to: navigation, search
Enhanced ancient staff? (edit)

The enhanced ancient staff is an improved version of the Ancient staff which can be obtained by using an ancient staff on the Clay golem in Uzer after completing the Elite Desert tasks.

It originally could not be recoloured from the Loyalty Shop, but this was later fixed on 10 September 2013. Ancient staves that have already been recoloured can be enhanced without losing their colour.

The enhanced Ancient staff has white and purple (or if it has been recoloured, the corresponding colour) particles at the top of the staff. This Enhanced version has 1694 accuracy and +2 prayer, making this equivalent to a level 75 staff, despite it still being considered a level 50 weapon and requiring level 80 magic to obtain.

If a player loses an Enhanced ancient staff in the Wilderness, it is possible for the player to run back and reclaim it. 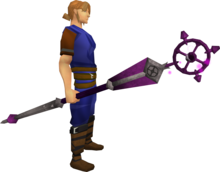 The update history project is a work-in-progress – not all updates to this topic may be covered below. See here for how to help out!
Retrieved from ‘https://runescape.wiki/w/Enhanced_ancient_staff?oldid=34265725’
Categories:
Hidden categories: