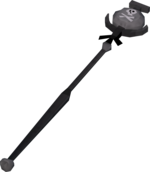 The staff is used in the Runecrafting skill. It is similar to a death tiara in purpose, as it can be equipped, allowing players to left click on the death altar to enter it and save an inventory space when crafting runes through not having to carry a death talisman. Jagex have also said that the staff can also be used for "distracting the eyes in the Abyss to help you sneak past". It cannot be used as a substitute for death runes when casting Magic spells.

This information has been compiled as part of the update history project. Some updates may not be included - see here for how to help out!
Retrieved from ‘https://runescape.wiki/w/Death_talisman_staff?oldid=35803387’
Categories:
Hidden categories: