From the RuneScape Wiki, the wiki for all things RuneScape
Jump to: navigation, search
This article is about the witch masquerading as an abbey sister. For the unicorn pet, see Dawn (pet).
For Lensig before the release of The Death of Chivalry, see Witch (Lensig).
Loading...
Abbey SisterIn combat (Quest)In Combat (Dominion Tower)

Lensig, also known under her alias "Dawn", is a witch who features in The Death of Chivalry. She pretends to be a sister of the Abbey of St. Elspeth Citharede. She tells the player that the Black Knights have found a weapon sealed behind a holy barrier and plan to sacrifice her to obtain it. She remains behind when Sir Owen and the player venture deeper to recover the wand. However, after the player breaks the barrier, she reveals herself to be a Zamorakian mage and steals Elora's wand. She uses it to cast a magic spell at Sir Owen, which kills then raises him, along with two nearby fallen black knights, as zombies, which are eventually defeated by the player. The player then pursues Dawn into the catacombs, where she attacks. After a long battle, the player kills her and recovers the wand.

After the quest, the player can search her body in the Tomb of the Fallen to acquire the Skull of Remembrance, an item that allows the player to watch cutscenes from the quest and provides unlimited teleports to the Black Knights' Fortress.

When the player uses the Skull of Remembrance on Dawn's dead body after the quest, there is an option to repeat the battle with her in the quest. After killing her again, the player will unlock Captain Dulcin's Black Knight captain's armour cosmetic override.

Dawn can be fought as a class X1 boss monster in the Dominion Tower minigame if the player has completed The Death of Chivalry. 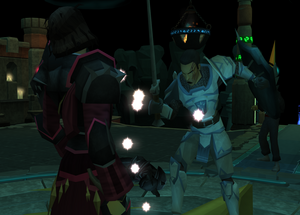 Note: Dawn's damage output seems to correlate with the player's; the higher levelled weapon the player wields, the more damage Dawn will deal with her own attacks, excluding the area of effect attack. This also affects the skeletons.

Dawn serves as the final boss of the Death of Chivalry. She fights the player using the Wand of Resurrection, and summons various skeletal minions to aid her during the fight. A good way to avoid her health-draining attacks is to keep running around. It is advised not to use melee as she will push you back occasionally.

When her health reaches 75, 50 and 25 percent, she summons 4, 5 and 6 skeletons respectively. These have to be killed in order for Dawn to drop her shield and start attacking again.

Also, occasionally, she will shout a phrase as 'Suffer!' and shoot a small purple projectile at you. These projectiles will create a purple cloud covering a 3x3 area and will damage you severely every few game ticks.

Lensig pretends to be an Abbey Sister.