The polypore staff is a degradable staff that requires 75 Magic to wield. It is created by adding 3,000 polypore spores and 15,000 Fire runes to a polypore stick. Doing so requires a minimum of 80 Farming, which can be assisted or boosted by items such as garden pies, and gives 300 Farming experience, or 0.1 experience per charge. Both hands must be free in order to charge the staff.

Once created, a polypore staff will carry 3,000 charges. The staff may be repaired at any time in the same manner in which it is created, by adding fire runes and polypore spores to a degraded polypore staff.

The polypore staff can be used to cast regular spells, but it can also cast its unique spell Polypore Strike, which is classed as an air spell. To use Polypore Strike, players must auto-cast the spell from the spell book section of the Ability book. This spell is available on all spellbooks and is the only combat spell on the Lunar spellbook. It requires 80 Magic to cast. 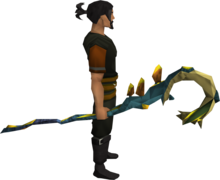 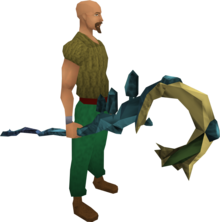 A player charging the staff.

The staff has 3,000 charges when fully charged. When the staff is used in combat, each attack the player makes with the staff uses one charge. The attack is a Magic (Air) attack and does not consume any runes, though the average price per cast is approximately 765, assuming that you sell the stick afterwards. The staff has a 1694 accuracy bonus.

When a fully-charged polypore staff is used to make an attack, it becomes a "Polypore staff (degraded)". However, this is only a name change and no combat abilities of the staff are lost or changed; it just becomes untradeable. When all the charges are used up, the staff reverts to a polypore stick. The player can create the polypore staff from the stick by repeating the process that charged it. The player can also recharge a degraded polypore staff; this requires polypore spores, fire runes in proportion to how much the staff is degraded, and level 80 Farming. For example, a staff that has used 1,000 charges (2,000 remaining) requires 1,000 spores and 5,000 fire runes to fully restore. The staff may only be traded when fully charged. Charging the staff gives 0.1 farming XP per charge.

The staff can be cleaned using a right-click option - doing this will revert the staff to a polypore stick and give back the spores equivalent to half of the remaining charges.