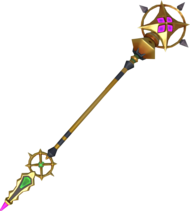 The Inquisitor staff is a tier 80 staff. The components are obtained from Archaeology, requiring a minimum level of 114 (boostable) in order to be created due to the praetorian staff's requirement. However, the staff is tradeable and may be purchased from the Grand Exchange or other players. It can be used without the Archaeology requirement needed to obtain components. It also requires a Runecrafting level of 93 to be assembled. The staff can be augmented using an augmentor, creating the augmented Inquisitor staff. This weapon is the magic equivalent of the terrasaur maul and hexhunter bow. The inquisitor staff gives no boost against other players in the Wilderness.

It has two passive effects when used against melee classed enemies which appear as a debuff on the target:

This item degrades to a broken, repairable state over 60,000 charges of combat. The base repair cost is 2,000,000 coins for a full repair, which is scaled to how damaged it is. It can be repaired by a Repair NPC, or for cheaper on an armour stand/whetstone.

When on the normal spellbook, Air Wave can be used instead of Air Surge as the staff is classed as a tier 80 weapon and the spell damage of Air Wave scales up to level 80. Air Surge is a level 81 spell and is not required for this staff. In addition, Fire Surge is not required either, as it will do the same amount of damage as Air Wave due to the staff's tier.

The staff was used by the inquisitors, a subsect of the Zarosian Secret Police.

The Inquisitor staff affects the following boss fights. Due to its boost against melee-classed bosses, it performs with tier 96-98 damage and accuracy, and so on average performs as a T97 weapon.[1]

It works when fighting the Memory of Nomad.

The following creatures and bosses are melee in nature, and thus are affected by the Inquisitor staff's boosts. Please note that this list is incomplete. For a complete list see Susceptible to inquisitor staff.

The Inquisitor staff provides a significant damage and accuracy boost against the following bosses, even when compared to a T92 staff of Sliske or a T90 noxious staff weapon.

The Inquisitor staff is 3.5% stronger than the staff of Sliske against melee-classed bosses, regardless of rotation.

The following table provides detailed analysis of the DPM (damage per minute) and hitchance increase when using the Inquisitor staff compared to T92 and T90 staves.[2]

Hitchances in the following table assumes that you have:

Additional Assumptions based on a variety of boss specific rotations were used for the above calculations:

Inquisitor staff pieces are only obtained while excavating spots in the Kharid-et Dig Site; the rates below are based on success of gathering materials.

In addition, a single inquisitor staff piece is awarded when completing the Zarosian IV collection for the first time, which requires Archaeology level 118.

The staff pieces are not dropped in order, they are dropped randomly.

The inquisitor staff has 60,000 charges of combat. The Inquisitor staff at most, costs 2,000,000 coins to repair completely. The repair cost is precisely calculated by the degradation percentage (i.e. with 75% charge remaining, a full repair would only cost 500,000 coins). It may be repaired through a variety of methods.

These less preferred methods cost more as they do not consider one's Smithing level for a repair discount.

These preferred methods provide a repair cost discount of 0.5% per Smithing level (including boosts).