From the RuneScape Wiki, the wiki for all things RuneScape
Jump to: navigation, search
For this item's dyed variants, see red, blue, green.
For other variants of this item, see uncoloured.
Staff of light? (edit)

The staff of light is a two-handed staff that requires 75 Magic to wield. It is obtained as a unique drop from ice strykewyrms, requiring 93 Slayer to kill. The golden parts of the staff can be recoloured into blue, green, and red or back to its original colour at a one time cost of 2,000 Loyalty points by using it on Xuan in Burthorpe/Varrock or Dilwyn in Prifddinas.

Recoloured staves must be returned to the original colour before adding an augmentor to create an augmented staff of light. 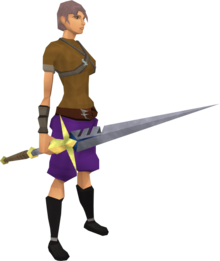