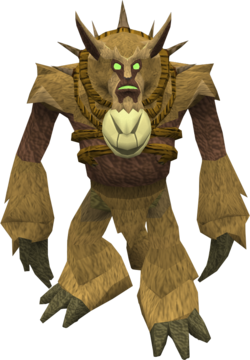 The Decaying avatar is a monster encountered in the Nomad's Requiem quest. It can heal three times while the player fights it, if it can eat nearby roots. The player can destroy the roots to prevent it from healing. Meleeing these roots, as the spawn is some squares away, is difficult to do before the Avatar reaches them and eats them. Each root appears depending on the percentage of life points it has lost in 25% increments: the first time after dealing 12,500 damage, the second after 25,000 damage, and the last one after 37,500 damage. Failing to destroy all three roots means that 125,000 life points of damage must be dealt during the battle.

Unlike the avatars of Creation and Destruction, the decaying avatar will not drain your prayer when it hits you.

Each subsequent root which appears should have a higher priority because it will heal more health. As each root heals the avatar to its full life points, the third root would heal 3 times as much as the first.

The Decaying avatar can be fought as a class A boss monster in the Dominion Tower minigame if the player has completed Nomad's Requiem and defeating it is a requirement to unlock Spellcaster gloves. If you want to fight the Decaying avatar, climber mode is recommended as he seems to appear more often when compared to endurance.

Weapons of tier 70 and above should hit the avatar fairly frequently. Roots spawn northwest then southeast then northeast and will heal the avatar to 100% should he eat them. The player can have more time to destroy the roots by safe-spotting the Decaying avatar from the opposite end of the room from where the root will appear. For example, if the next root is the southeast one, the player should range the avatar from the west end of the room. Therefore, the avatar must walk farther to get to the root, and the player can run there and destroy it before the avatar reaches it. Activating Protect from Melee or Deflect Melee is highly advised when switching safespots. Using bind or freeze spells is not advised as it will not prevent the avatar from walking to the roots.

When fighting the avatar in Dominion Tower, the same strategies as for Nomad's Requiem can be used. In addition, the avatar can be trapped using the outer ring of the fighting arena. Since the Decaying avatar is a Class A boss, it can only appear after floor 6 in the Dominion Tower.

The healing roots do appear in the Dominion Tower as in quest. Unlike in Nomad's Temple, the roots will spawn in this order: north-west, north-east, south-west. If possible, try to position yourself so that you will be nearer where the root spawns than the avatar will be. The roots will not grow back in the same spawn.