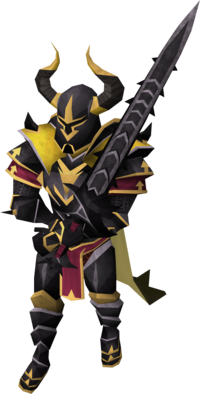 Black Knight guardians are elite guards and a division of the Kinshra, sent to guard important locations throughout Gielinor. While their appearance is identical to that of an Elite black knight, their strength and abilities are different. Two Black Knight Guardians are encountered as the bosses of A Void Dance, in which the Kinshra attempt to use a captive Void leech in order to weaken Falador. The Guardians protect the room with the pest in it, and one must be fought by the player, while the other is fought by Captain Korasi.

A Black Knight guardian is fightable as a class E boss monster in the Dominion Tower minigame if the player has completed A Void Dance.

Give up. You don't stand a chance!

Your spirit fuels ME now!