A water battlestaff is a medium power water elemental staff. It requires 30 Magic to wield and provides an unlimited amount of water runes. Water battlestaves can be created through the Crafting skill at level 54 by using a water orb with a battlestaff, granting 100 Crafting experience. It is also dropped by monsters and a reward of treasure trails. This is a good item to cast High alchemy on as the resulting profit is 725 coins, if the water battlestaff and nature rune are both bought from the Grand exchange. As the name suggests, the staff features a higher attack bonus than the staff of water, making it a better staff to use than the staff of water. It can be upgraded to a mystic water staff by Thormac for 40,000 coins after completing the Scorpion Catcher quest or for 27,000 coins after completing the Seers' Village hard achievements.

With 85 Crafting, players may attach a shade skull to the water battlestaff, creating a skeletal battlestaff of water. 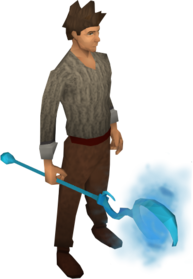 The update history project is a work-in-progress – not all updates to this topic may be covered below. See here for how to help out!
Retrieved from ‘https://runescape.wiki/w/Water_battlestaff?oldid=33937202’
Categories:
Hidden categories: