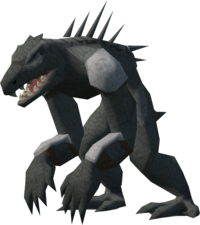 Dagannoth sentinel is a monster encountered during the Blood Runs Deep quest.

Two of these powerful Dagannoth guard the entrance to the Dagannoth Mother's cave. They can use all 3 styles of combat: melee, ranged (the normal Dagannoth ranged attack) and a water magic spell. The best way to defeat them is to use the Balmung as it not only takes advantage of their weakness against slashing weapons, but also provides an increase in damage dealt when used against dagannoths (this also applies when using abilities). Alternatively, if a defensive approach is preferred, an abyssal whip or chaotic longsword used in tandem with a shield also works well.

While fighting them, it is advised to spread the damage evenly between the two sentinels. If the difference in life points between them reaches a certain amount, the sentinel with more life points will utter a 'rallying cry' and bring the other's life points back up to an equal level (This shows up in the text box as The sentinel gives a rallying cry and its companion's wounds heal slightly). This can make them very difficult to kill.

The Hurricane and Quake threshold abilities will be of particular use if utilising this method with the Balmung. After one of the sentinels has died, the other sentinel will start attacking unpredictably with all three styles of combat. However, it should already be at low health and will be easy to kill. These monsters are also not immune to poison, so a good strategy is to apply a dose of weapon poison at the beginning of the battle, and then use either the Balmung or a high level two-hand slashing weapon like a godsword, switching back and forth between the two monsters and making use of area-of-effect abilities.

If you have higher skills you could kill one and then the other by using either threshold and ultimate abilities in quick succession. After which the other could simply be killed.

It can happen that after wounding one sentinel too much, as the other starts healing this one, you are unable to attack the original until both sentinels have fully healed each other. The solution is to stand beneath one, attacking the other with range or mage. While standing on top, the sentinel cannot attack you, nor heal the other.

The update history project is a work-in-progress – not all updates to this topic may be covered below. See here for how to help out!
Retrieved from ‘https://runescape.wiki/w/Dagannoth_sentinel?oldid=34545875’
Categories:
Hidden categories: