From the RuneScape Wiki, the wiki for all things RuneScape
Jump to navigation Jump to search
The Old School RuneScape Wiki also has an article on: osrsw:The Untouchable
"Untouchable" redirects here. For other uses, see Untouchable (disambiguation). 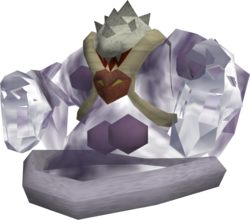 The Untouchable is one of the boss monsters fought in the quest Dream Mentor.

It is weaker than its predecessors, other than that having higher defence.

If players are using the lectern as a safespot, it is worth noting that immediately after The Everlasting dies players should run out of the safespot, and run back when the Untouchable spawns. This because the Untouchable upon spawning will neglect the safespot and attack the player. The player would be unable to pass through it and thus will have to receive unavoidable and unnecessary damage.

Note: Players must restart if they choose to leave during the middle of the fight. If they decide to return after leaving early, they must start over from The Inadequacy.

The Untouchable can be fought as a class B boss monster in the Dominion Tower minigame if the player has completed Dream Mentor.

This information has been compiled as part of the update history project. Some updates may not be included - see here for how to help out!
Retrieved from ‘https://runescape.wiki/w/The_Untouchable?oldid=35682216’
Categories:
Hidden categories: