From the RuneScape Wiki, the wiki for all things RuneScape
Jump to: navigation, search
Penance trident? (edit)

The penance trident is a staff made of dead penance demons that requires level 50 Magic to wield. It can be obtained from Barbarian Assault with 170 Honour Points in all four roles. The trident comes with a special rune-saving effect and can be upgraded to the penance master trident for an additional 220 points in each role, along with 70 Attack, by speaking to Commander Connad. 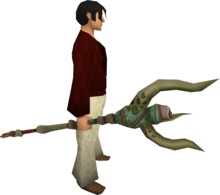 When equipped, it will provide infinite water runes similar to an elemental staff. It will also attempt to "save" runes used in any spell. This is how it does so:

This rune saving ability is not as cost-effective as using an elemental staff in most cases, but a number of spells do not use any elemental runes besides water. Elemental staves, with the exception of the Armadyl battlestaff and Camel staff are also low-levelled compared to a Penance Trident.

Of course, for some spells, the 1/30 saving might outweigh the cost of elemental runes, but the Grand Exchange prices change such that this is never permanent. The rune saving ability works for all spells. For combat spells, the staff of light may be a better choice since it can save all of the runes for a combat spell with 1/8 probability.