The lunar staff is a magic weapon and piece of lunar equipment. It is created during the Lunar Diplomacy, so 65 Magic is required to obtain lunar staff. Despite the quest and wield requirements of 65 Magic, the staff itself has the stats of a level 50 weapon.

During the quest, it is made by using a dramen staff on the Air, Fire, Water, and Earth Altars (in that order). Once the quest has been completed, the staff can no longer be created this way, but must instead be purchased from the Oneiromancer for 30,000 coins. The staff cannot be purchased if players already have one in their possession. The Oneiromancer has a fixed sequence in selling the Lunar equipment, and the staff is the first one on sale.

A player enchants a dramen staff to Lunar staff.

As an enhanced dramen staff, the lunar staff can be used to access Zanaris and use the Fairy ring transport. After completion of A Fairy Tale III - Battle at Ork's Rift neither the dramen nor lunar staff are required to use the Fairy Network and can be considered useless. 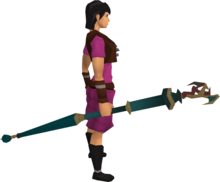