The staff is the weakest, most basic magic weapon in RuneScape. Visually, the staff is identical to the battlestaff and the dramen staff in appearance. It is recommended to upgrade from this weapon as quickly as possible, as there are more cost effective weapons which can be used at the same level. The recommended upgrade is to an elemental staff, such as a staff of air which will assist greatly in Magic training. 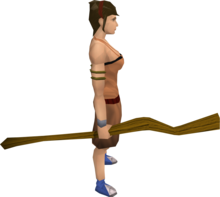 The update history project is a work-in-progress – not all updates to this topic may be covered below. See here for how to help out!
Retrieved from ‘https://runescape.wiki/w/Staff?oldid=34986033’
Categories:
Hidden categories: