From the RuneScape Wiki, the wiki for all things RuneScape
Jump to: navigation, search
Dominion crossbow? (edit)

The Dominion crossbow is a two-handed crossbow, available as a possible reward from the Dominion Tower. It is received as a random reward through the rewards chest determined by how high a player's dominion factor is.

It can only be used in the arena but can be equipped anywhere inside the tower. Upon leaving the tower, the Dominion crossbow will be unequipped to your inventory or stored in your bank if your inventory is full. If both are full, it will be dropped. It degrades, and only lasts for 100 shots before crumbling to pieces. It is also possible to receive more than one from the Rewards Chest.

This power-up is unlocked after the player has reached floor 25 in Endurance mode. 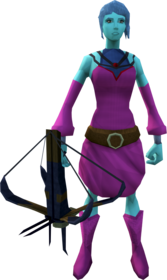