From the RuneScape Wiki, the wiki for all things RuneScape
Jump to navigation Jump to search
The Old School RuneScape Wiki also has an article on: osrsw:Dad
This article is about the NPC. For Distractions and Diversions, see Distractions and Diversions.
This article is about the troll from Troll Stronghold. For his son, see Dad (junior).

Dad is a troll that players must fight during the Troll Stronghold quest. Dad is also fightable as a class F boss monster in the Dominion Tower minigame if the player has completed Troll Stronghold.

Since nearly all trolls are named after the thing they first ate, Dad has acquired his name from eating (or trying to eat) his father. This is further confirmed by Dad himself, as Dad replies "Troll named after first thing try to eat!" when a player asks about his name before battling him. He challenges players to fight him in the troll arena so players can pass him and have access to the northern side of Troll Country, including the God Wars Dungeon. He will stop the player from attacking just before he dies to ask you to spare his life.

He has a son, who ate him and thus too bears his name. 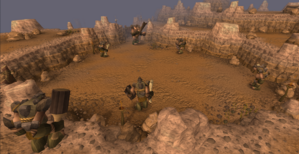 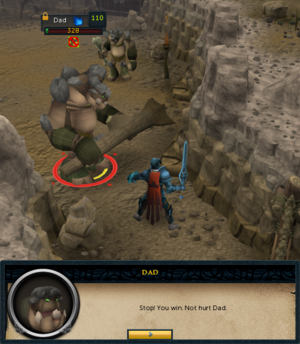 Dad asks the player to spare his life.

Dad is larger and stronger than normal Trolls. He is very powerful with a maximum hit of 440, and his hits can be slow or fast at times. When he hits there is a chance that he may do a giant swing that sends player flying through the air, momentarily stunning them; this attack may be mitigated by standing next to a wall while fighting, or using the Freedom ability. Protect from Melee is recommended when fighting him. Despite his strength, Dad is notable for being one of two non-aggressive trolls which can be fought, the other is the troll spectator.

Previously, Dad could only be killed once outside of Dominion Tower. Since the troll update, it is possible to refight Dad. Dad counts towards a troll slayer assignment, but fighting him is not advised as there are weaker enemies and the experience rate is poor.

This information has been compiled as part of the update history project. Some updates may not be included - see here for how to help out!
Retrieved from ‘https://runescape.wiki/w/Dad?oldid=35626551’
Categories:
Hidden categories: